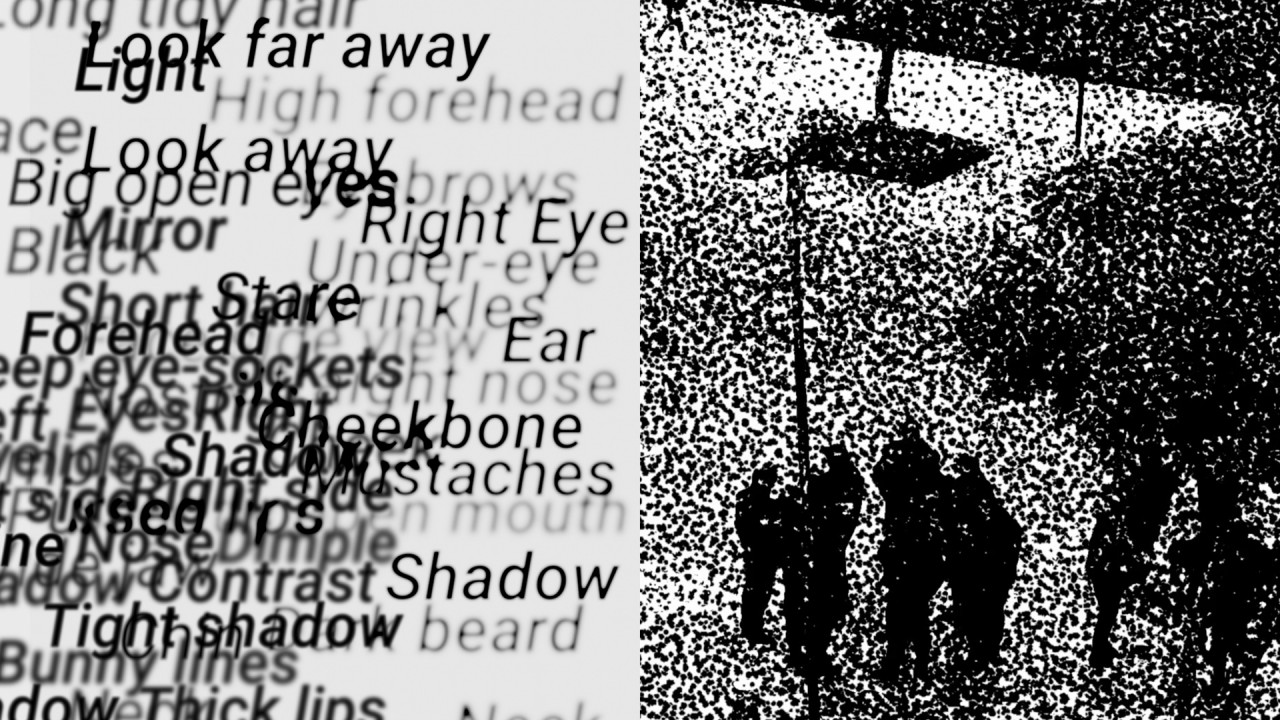 Physicists say that when you approach a black hole your time and space stretch so much that movement becomes imperceptible. Something similar happened to all of us with the start of the year 2020. An invisible threat threw us abruptly into a state close to an event horizon - a boundary beyond which events cannot affect an observer. The gravity of our private bunkers became so strong that light from outside started escaping the reduced trajectories of movement.

And when the stimuli from the outside world vanish and you start living inside the walls of your own skull but you are a visually thinking body i.e. artist, you start reanimating the world from what you still have at your disposal – memory.

The two moving image series presented in this exhibition by Alexander Schellow and Kalin Serapionov, appeared during the first lockdown in the spring of 2020. They both had public presence in social media as the only channel of interpersonal communication left effective during that time of self-isolation. They both reconstructed “a world” of fragments, leftovers and side-effects as a therapeutic way to stay sane and keep the world running.

On March 22nd 2020 Alexander Schellow posted on his Facebook wall the following status:

Plain drawing/animation (re)construction from memory seems to gain a new meaning these days - days full of isolation and paranoia that tends to render physical public space into pure fiction. I start to draw and post a series of little animation sequences - planned to be one per day…

That post was the start of a daily release of an incredible collection of ultra-short animated sequences - “spots” as the artist calls them, lasting six months or 179 days up until September 9th 2020, when the following post popped up:

#165 Life is funny sometimes. Especially when it comes across as "tragic". Is a double worst case a good case? In any case, this day has taken a decision away from me... Many of you know that in my practice one thing above all is practically impossible: to find a meaningful end. To simply stop or to continue indefinitely... For almost all projects this decision is rather arbitrary. This was also the case with the posts that some of you followed regularly over months. I started it out of the impulse of the COVID-19 lockdown and I have been reflecting for quite a while now about a possible impulse that could end it. This morning the time had come: the hard drive on which I had stored all the fragments, that I had scanned and put into the timeline over the past months for future posts, no longer opens. Data is irrecoverable... Voila!

Each spot in the series is about 3 seconds long and consists of about 36 drawings in black ink. According to the artist this is the minimum duration, which is impossible to divide (in opposition to time and space, according to Bergson). In a paradoxical way, it reconstructs a “present” that existed at a certain past in memory, which gives it a character of fiction. Like those distant creations in early primitive cinema before montage existed as a concept, the short animations are beyond narrative but are narrative ‘pregnant’.

Kalin Serapionov presented his series “At the End of the Day” also in the spring of 2020 within the frames of the online project “#sarievselfisolation” by Sariev Gallery, Plovdiv.

In a manner following his earlier work “A Blonde Woman in a Red Dress and Bright Lipstick is Talking on the Phone and Smoking a Cigarette” (2016), where the portrait of a person was drawn by the color oscillography of the video editing software, the short animations in the series are again portraits (hence, the portrait format of the screen).

Exploring the constrained options in self-isolation, the artist made “quick drawings” of the people with whom he talked online while in isolation. In order to save the vanishing image of the person on the screen, the hand of the artist saves the image on paper. But the drawing produces only sound, not image. We hear the sound, which the pencil produces while pressing the paper, but we do not see the resulting image. That is left virtual and accompanied visually by words animated on the screen describing the features of the character being portrayed at the moment. This constant and dynamic shift between appearance and absence creates fictive portraits existing only in the beholders’ imagination, choreographed by means of sound and word.

It is an interesting parallel to draw between these artists’ practices and the current shift in photography driven by the advent of computation, which the artist David Claerbout named “The Silence of the Lens”. In that paradigmatic shift the medium that used to be a physical imprint of the world, is being taken over by software turned into a medium for recreating the world not by reflection of light, but according to mathematical models encoded in the matrix of the apparatus.

The ICA-Sofia Gallery is presenting these works as a unique synchronous statement concerning this special time in our current “history”.

Alexander Schellow deals closely with relations between space, perception and action at the junction of artistic and scientific research. His work revolves around a possible documentation on questions of orientation, or of the ways attention is scattered and distributed into given spaces. Since 1999, he has been working on reconstruction processes from memory, based on an ongoing daily drawing practice. This generates different formats which often evolve over a long period of time, partly related to specific contexts. They build series of drawings, animations / films, archives, installations, readings, performances and texts.

Since 2013 Schellow directs the department for animation and time-based media at erg - école de recherche graphique in Brussels.

Kalin Serapionov (born 1967) is an artist from Sofia. He works with video and his interest is focused on the ability of this media to generate suspense without sliding into the narrative devices of the cinema. The relationship of video and video installations with space, the process of turning an image into a meaning and the effect of visual impact. His projects are related to context, time, circumstances, memory, locations and events and their significance. He explores different human attitudes, characters, communities, habits, behavior and relationships, contemporary cities and ways of life. His works are striving to create powerful, high-impact visions that simultaneously make use of the achievements of modern society, but also subject the clichés that they create to critical treatment.

The exhibition is part of the 2021 annual international program of ICA-Sofia entitled "Superpositions*". The programme is guided by the principle that interdisciplinarity is a major vector in contemporary art practice. The series of exhibitions examine the connections between art and fields such as: politics / poetics; science and technology; popular culture; gender and social movements; ecology and migration. The discursive couples are reflected in the structure of each exhibition - a dialogue between two authors - one from Bulgaria and one guest.