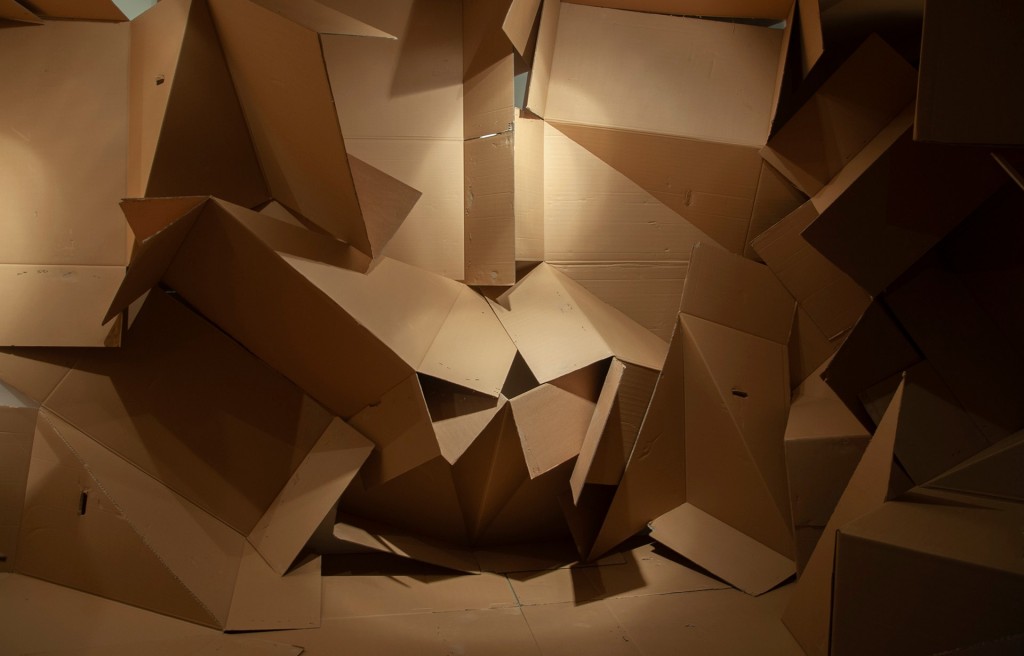 The ordinary cardboard boxes used to pack kitchen and bathroom appliances are for the artist Alexander Valchev sculptural material with plastic qualities. It is used to create three-dimensional objects installed in space and to engage specifically “in” and “with” this space. The perception of both objects and space is classical: the viewer is asked to walk around, to observe and to contemplate; to evaluate aesthetically the “abstract” geometrical forms, the volumes and their interrelations. The cardboard boxes “are” and “aren’t” the art work both at the same time. They are not only building up the space but are also supplementing various meanings and semantics; they are “telling” us about the time when they were made, about the culture of this society from its highest to its lowest everyday strata. The art work here is not merely the box but the space – it is populated by volumes constructed by, within and in-between the boxes that are known from the artist’s previous iterations. In times past the viewer would encounter the self-portrait of the artist drawn on the surface of the boxes/volumes. This exhibition now is a total environment and a space that is maybe the “self-portrait” of the artist as it is. One is tempted to talk about claustrophilia – the author’s love for closed spaces that are at the same time the construction (though fluctuating), as well as the energy image (quite powerful) of the world.

By the use of cardboard boxes as his material, Alexander Valchev is part of a notorious “family tree” in the art of the last few decades. From the wall-mounted Pop-art reliefs of Robert Rauschenberg, through the minimalistic compositions of Heimo Zobernig, and on to the open forms in the works of Danh Vō, the card box used in art has already acquired the aura of timelessness. From a material that is both perishable and recyclable, the cardboard in the works of Alexander Valchev is transforming the everyday life associations in order to impress time and again ideas about space and structure, to express the inner feelings of the artist, and to challenge the experiences of the audience.
...
Alexander Valchev (b. 1973) lives and works in Sofia, Bulgaria. In 1998 he obtained MA in Sculpture at the National Art Academy, Sofia with Prof. Krum Damianov. He obtained MA in Photography from the New Bulgarian University, Sofia in 2013. Among his many solo exhibitions are: “How to Deal with the Object” at Credo Bonum Gallery, Sofia (2019); “The Sculpture as a Hobby” (2014) and “Brick by Brick” (2018) at Arosita Gallery, Sofia; “A New Life” (2015) and “We Love the Dogs and the Dogs Love Us” (2011) at Goethe-Institut Bulgarien, Sofia; “For a Few Dollars More” (2012) at Sofia Arsenal - Museum of Contemporary Art, Sofia. He participated in international festivals such as: “Danube Dialogues”, Novi Sad, Serbia (2018); “UAMO festival”, Munich (2016); Month of Photography, Vienna (2008); Month of Photography, Bratislava (2007); and in group exhibitions such as: “The Reality Despute”, 6 Shipka Str. Gallery, Sofia (2017); “In the Labelling Gap”, Sofia City Art Gallery, Sofia (2016); “Focus Bulgaria @ viennacontemporary”, Vienna (2015); “Art for Change 1985- 2015”, Sofia City Art Gallery, Sofia (2015) and many others. His works are in the collection of the Sofia City Art Gallery and the National Art Gallery in Sofia.