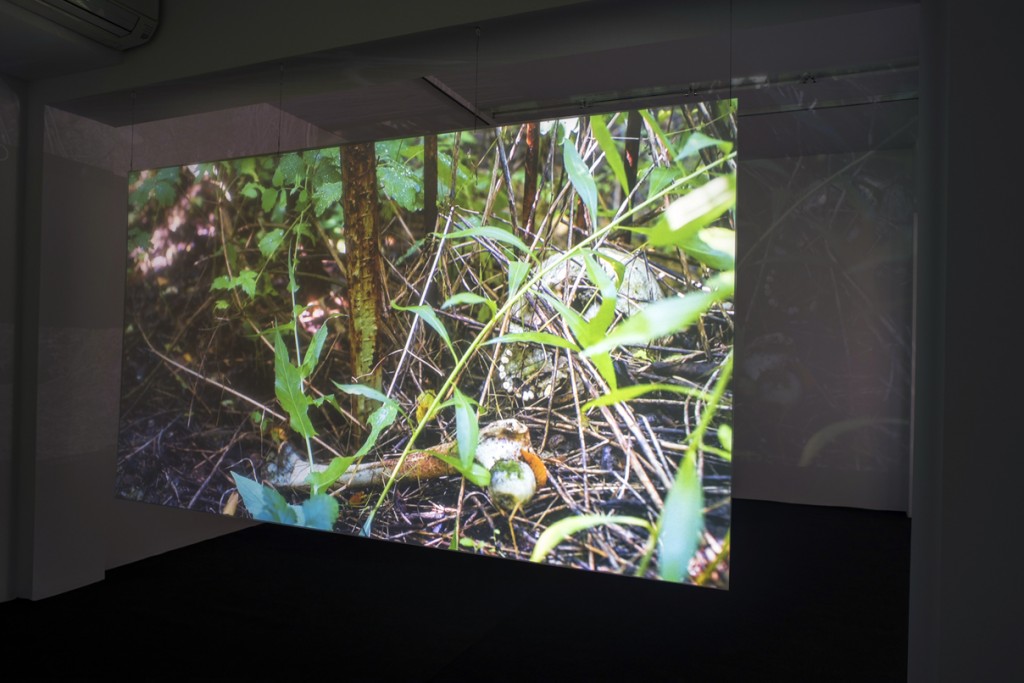 In Radostin Sedevchev’s new project “Present Absence” the viewer is made to witness a kind of permanent yet rarely observed events truly meriting the definition – “the circle of life”. In an abandoned cemetery the artist used motion-activated surveillance cameras to capture nocturnal life. He then added his own human point of view to that footage with footage filmed in daytime.

What’s been abandoned, as if unneeded for the humans, has meaning and use in nature – for the animals and specifically for a family of badgers that have accepted the location as their natural habitat. The cameras were fixed for months capturing stuff that humans define as permanent, tranquil, even idyllic – the change of seasons, growth and vegetation, blossoming and repose. At the same time the lenses capture all sorts of daily or nightly, ordinary yet diverse activities of insects and birds, of wild animals, and all the complex interwoven relations between species and specie individuals.

Compositionally Radostin Sedevchev’s “Present Absence” is a video installation. It aims to hold attention until one has merged with the view and the immersive effect of “loosing” oneself in the long neglected everyday life of nature is achieved. The basis of the work is the evermore popular notion of “slow time”, which we need to better reflect and experience, to make us fit for avoiding mistakes, unwelcomed intervention and aggression.

The artist does not claim to be an eco-activist with this work. However, these days the issues of ecology seem to have become the greatest concern of humanity. “Present Absence” comes across as an ecological appeal for respect and contact.

Radostin Sedevchev demonstrates once again his belonging to that wonderful artistic specie whose work is based on research; artists who are able to transform the research process into an art work. He has a special sensibility to time in its various manifestations – the measured time of history, as well as the very substance of time “in action”. He is already known as the “restorer” of human memories and of the lived-yet-forgotten past. Now the artist is urging the audience to witness for at least an instant the naturalness of time passing, and thus to partake in its process. The popular quote from John Archibald Wheeler who authored the definition for “black hole”, says: “No phenomenon is a physical phenomenon until it is an observed phenomenon.” That is valid for art too.

Curator: Iara Boubnova
- - -
Radostin Sedevchev was born in Pernik in 1988. Lives and works in Sofia.
He has PhD from the National Art Academy (NAA), Sofia in 2018. Graduated the educational program “Close Encounters – Visual Dialogues / School4artists” of the ICA-Sofia (2017). He has MA (2014) and BA (2012) in “Mural Painting” from NAA, Sofia (2014). He studied in the Fine Arts University (HfBK) in Dresden, Germany (2017) and the Glyndor University in Wells, UK (2011). His first solo show was “Unforeseeable Past” (2017) at the “Vaska Emanouilova” Gallery (curator Vladiya Mihaylova). The artist was shortlisted for the BAZA Award for Young Artists (2018).