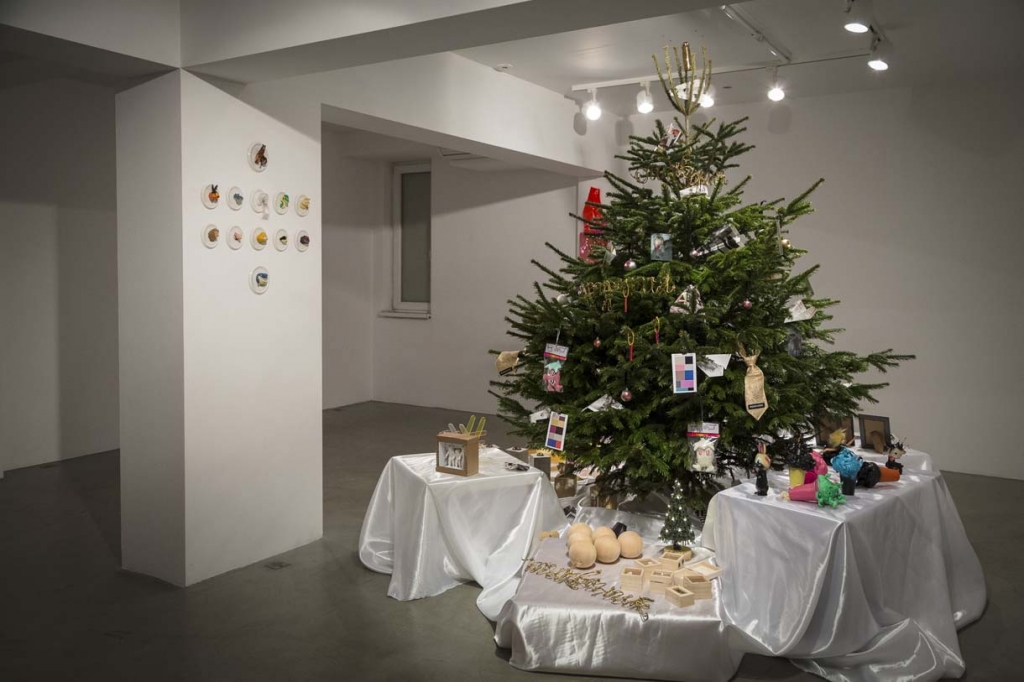 A Christmas Show of Artists’ Editions

We are aiming at organizing our Christmas show with artists’ editions – works of distinctly object- and souvenir-like appearance as a counterpoint to the dark 2016, a year full of disappointments, unfulfilled hopes, unresolved and many new problems. After this turbulent and strange year the holydays are nonetheless approaching and with them – the promise of a new beginning. We are trying for a joyful, enchanting and amusing display with a real Christmas tree on which, under which and around which art products are fabulously abundant. We are exploring what and how are participating artists thinking of the toy...
We were inspired by the Bulgarian local colloquialism “from a toy – to a cry” that is hard to fully translate. It is meant to signify here the confusion and the inadequacy of the political space throughout the year, the evermore visible contradictions and confrontations, the topsy-turvy political situation both here and abroad. We have decided to use the motto Toyphilia and Toy Phobia for these editions.
The toys for children are with us for as long as the world exists. We trust that each one has had, and maybe still has, at least one beloved toy. Christmas time is a time of true toy bacchanalia – toys soft and hard, dolls and cars, puzzles and action figures to advance thinking and/or abilities... However, today’s culture knows not only the toys for kids. Life is full of “toys” for grownups – boys and girls; and also of dangerous toys, sex-toys, all kinds of impossible and unrecognizable toys, scientific, folkloric and contextual toys; or toys that are either miniature or huge objects; mechanical toys and battery powered toys, spring and balance triggered toys; toys for thousands of dollars and toys for a few cents... The attitude to the consumerist and metaphorical infinity in this show is quite possibly defined by the notions of irony and sarcasm. Throughout the years after Bulgarian contemporary art entered the world art scene these are two of its most potent tools. The self-irony and sarcasm is also somehow a marker of confusion, demolished values, frustration and even desperation. But they are also a sign of analysis and judgment, distancing and imagination, ability to play around which is so important to survive.
The limited edition works by almost 30 artists are planned for additional samples should the “toys” win the interest of the audience.
Participating artists: Boris Missirkov and Georgi Bogdanov, Boryana Nikolova, Vitto Valentinov, Vulko Chobanov, Dimitar Solakov, Ivan Moudov, Iskra Blagoeva and Stela Vasileva, Kalina Dimitrova, Kalin Serapionov, Kiril Prashkov, Krassimir Terziev, Lubri, Luchezar Boyadjiev, Mariela Gemisheva, Marina Genova, Martin Penev, Miryana Todorova Miryana Art, Nedko Solakov, Pravdoliub Ivanov, Raycho Stanev, Rositsa Getsova, Samuil Stoyanov, Sasho Stoitzov, Svetlana Mircheva, Stefan Ivanov, Stefan Ivanov, Stefan Nikolaev, Zlatin Orlov.
Organized by: Iara Boubnova