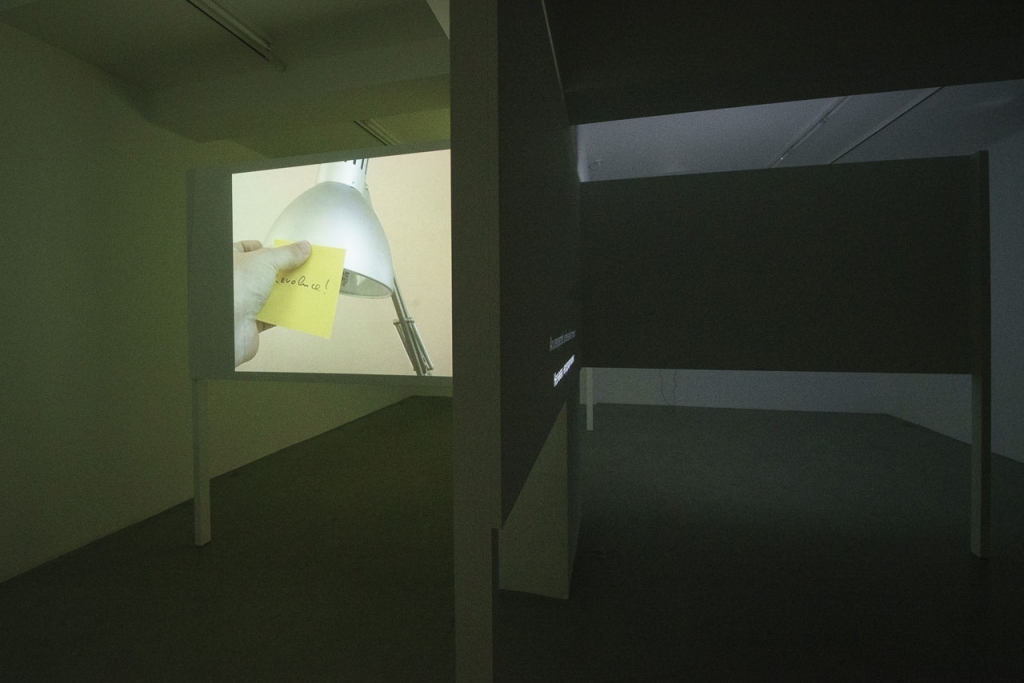 For his project “Socio-fiction” Zbyněk Baladrán, together with curators Edith Jeřabkova from the Prague association Are and Iara Boubnova from the ICA-Sofia, has prepared four related video installations: “Night of the World”, “Socio-fiction”, “Preliminary Report / Case Study”, and “Approximation of Infinite Sequences”. They showcase his work in a temporal and thematic continuity. The works of Baladrán might be seen within the anthropological and ethnographic approaches for investigating society through art that have become especially productive lately. Zbyněk Baladrán is dealing in practice and in theory with the metaphor of archaeology as a creative method. He is interested in what kind of an image will humanity come up with and in what kinds of societal systems and regimes will it function. The artist is using video, text and installation. His works could be characterized as an analytical search for interconnections in the past and its construction as an attitude towards the dominant epistemological models. Baladrán is one of the first Czech artists to interpret analytically the format of the video in relation to the leftist heritage of the past. He is using references to the avant-garde and analysis of the new aesthetics of information distribution, lectures and the working environment. Together with Ján Mančuška and Vit Havránek he is exploring the rhizomatic models of functioning of societal structures. In spite of the rational and analytical approach, the works of Baladrán are distinguished by their sensory quality. The new installation at the ICA Gallery will provide the Bulgarian audience with an opportunity to meet for the first time the works of this author.

Edith Jeřabkova: In his works Zbyněk Baladrán is investigating territories that are occupied by that part of civilization, which we call Western. Using methodology similar to those used by the ethnographer, the anthropologist and the sociologist, this post-humanist “archaeologist” is digging up the remnants of the not-so-distant past. He is searching for spatial “pockets” where the way of life is reflected with its systems, rules and coincidences; as well as for the objects through which humanity, obsessed with itself, is arranging the image of its past and future. We have to ask the question why the wholeness almost always means decay with Baladrán? The five video projections in this show are not only a spectacular handling of the space of the works; they seem to be a constant search for the spark of the Almighty and a reminder for the asynchrony and the impossibility to connect things without the presence of a hegemonic power – such a connection will always be reversible, that is to say – it does not have real wholeness. Although we know the single parts and we know how they function, plus we are sure that they belong together, we are still not able to act and prefer to work in concentration on the details– in order to succeed at least at the lowest level. That is why for the time being we are observing the wholeness temporarily and only on paper – through various diagrams, arrows and links from one to another fragment of the whole. We are looking for our position at a specific point – our fixed position on one of the continents, our niche in between people and objects, between the first and the second nature. Even after the possible resolution of this connectedness, in the near future we might be able to accept the notion of the whole as a human mind stuffed with objects and equipped with interface or maybe a cyber war. We need to understand though, that our fixed gaze on that point, which we claim and consider not to be interesting for us, is constantly changing while being constructed by relations, movements and transformations of the “other” around us. This commitment of ours – at the border between the interior and the exterior, is something like a surrogate activity whose purpose is actually unclear to us.

The exhibition is part of a project representing various artists and groups from the Czech Republic and Bulgaria thus connecting the two art scenes. In March 2015 the Czech Center in Sofia hosted the first show from the project titled “Sisters, hold on!” by Václav Girsa. In April 2015 there followed the exhibition “Churches and Drawings” by the duo photographers Lukáš Jasanský & Martin Polák at the Lastici Gallery in Plovdiv. At the same time the Czech Center in Sofia hosted the installation “All Tomorrow Exotic” of the two Bulgarian authors Lubri and Voin de Voin. During this time the show of Jiří Kovanda titled “Nothing in the Middle” took place in Sariev Contemporary gallery in Plovdiv. The cycle ends with the exhibition “Socio-fiction” by Zbyněk Baladrán in the ICA Gallery, the show of the Rafani Group in the Czech Center and the talk with Jiří Kovanda also there.

Zbyněk Baladrán (b. 1973, Prague) is an artist, curator and exhibition architect. He studied art history in the Philosophy Department of the Charles University (Univerzita Karlova) and in the studios for Visual Communication, Painting and New Media at the Academy of Fine Arts, both in Prague. In 2001 he co-founded Display, a space for contemporary art, which in 2007 was transformed into Tranzitdisplay (http://www.tranzitdisplay.cz/en) where he is responsible for the exhibitions program. Together with Vit Havránek he curated “Monument to Transformation”, a three-year long research project on the social and political transformations. He was a member of the curatrorial team (through tranzit.org) of Manifesta 8 in Murcia, Spain (2010). He took part in the 11th Lyon Biennial, in Manifesta 5 in Donostia / San Sebastian (2004), and in the 56th La Biennale di Venezia (2015). He is represented by the Jocelyn Wolff Gallery in Paris and Gandy Gallery in Bratislava. http://www.zbynekbaladran.com/