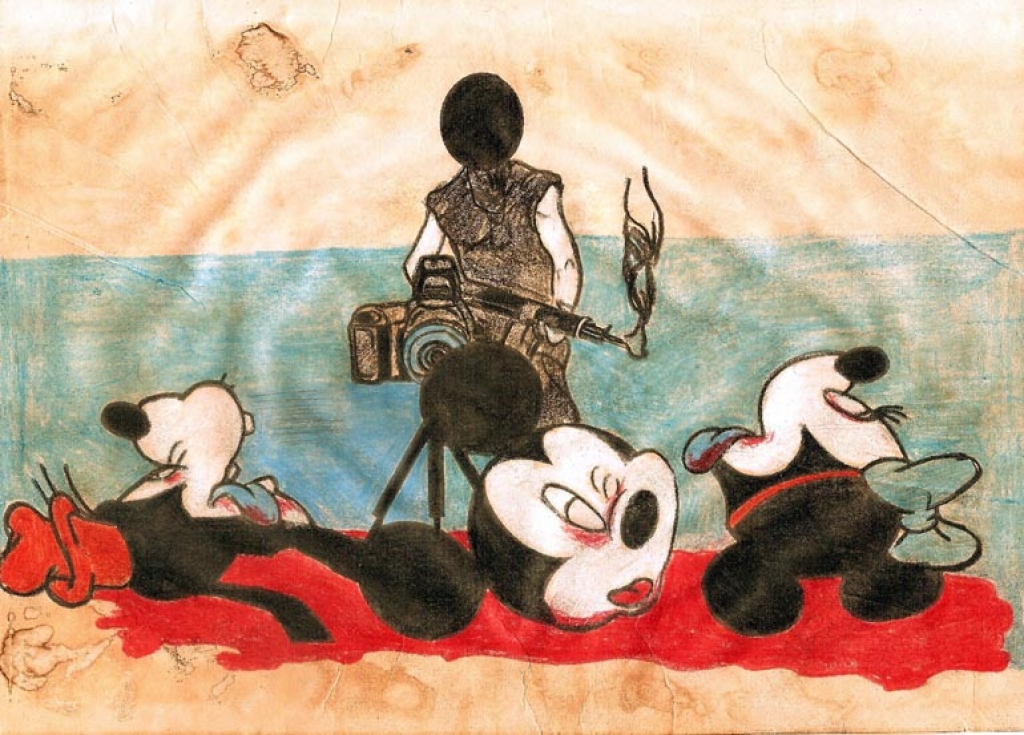 After 5 years absence from Bulgaria Oleg Mavromatti is presenting in his one-person show a cycle of drawings. They were provoked by his conversation with the artist Oleg Kulik in New York in the spring of this year. The topic of their talk was a hot one – ISIL, the Islamic State of Iraq and the Levant.

Defining religious fundamentalism as a reaction to both liberalism and globalization has become universally popular today. However, philosophers often express opposing opinions. According to Slavoj Žižek ISIL is far from being religious fundamentalism because of its admiration for Western culture. The message and the image of the true believers are compromised by the multiple murders that are actually manifesting a weakness. On the contrary, Boris Groys sees in ISIL a “new (artistic too) avant-garde” after the prolonged impossibility to have a radical manifesto in the arts of the postmodern age – it is an answer to the cold orderliness of the West, which is deleted with passion, spontaneity and dedication.

In his works Oleg Mavromatti is criticizing the sensationalistic use of the notions of “new humanism” and “avant-garde” by Groys via the utilization of a meta-modernist patchwork of symbols. The colors in his drawings are ironical of the possible interpretation that the “beauty of the executioner and the executed in the minimalistic composition of black (believers) and orange (unbelievers) against the background of the yellow desert and the blue sky… is quite possibly inspiring philosophers such as Groys”.

While Boris Groys and Oleg Kulik are collaborating on a new show dedicated to the “new humanism” exemplified by ISIL, the principled position of Oleg Mavromatti is that the avant-garde is always proposing a widening of the borders. “Politically what we are witnessing is a return to the past – to absolute prohibition and to absolute conservatism. This is not about avant-garde but about restoration. The only product we see is the mysterious video clips of executions and destruction of the cultural heritage of mankind. But these sights cannot be likened to any modernist manifesto because they are not offering anything else but sheer destruction”.