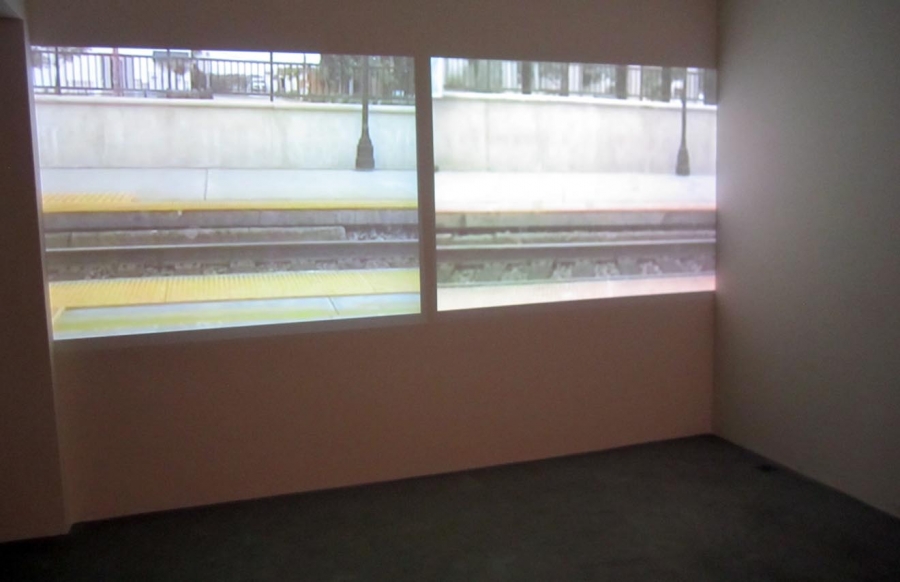 Vlado Valkof is one of the most successful young Bulgarian architects from the last decades. In 2012 was awarded the prestigious award of The European Centre for Architecture Art Design and Urban Studies and The Chicago Athenaeum: Museum of Architecture and Design. He is included in the "EUROPE 40 UNDER 40" list of EUROPE'S MOST IMPORTANT AND EMERGING YOUNG ARCHITECTS AND DESIGNERS. His career is developing abroad – in USA as well as in a number of European countries. He has participated in international competitions with his architectural projects, he has won awards, and he and his work are covered by professional world magazines. At the same time he is still searching for answers to some of his concerns while using the means normally associated with the visual arts.

In the video installation titled Moving Distance he is concerned with issues of space that are innate for architectural thinking, with the relationship between movement and statics, with the manmade object and the natural environment. At the same time his work investigates speed and the constant transformation of our complex surroundings.

Two people are moving at the same time and with the same speed but they are located at different points in space – they are physically separated by the length of a train. One of them is at the very front of the train (the front car) while the other is at the very end of the train (last car). They are using two independent of each other "digital eyes" at the same time – cameras documenting everything that happens beyond the window frames of the train. Hypothetically, both observers are looking at the same "view" but with a time difference of a just a few seconds. And that makes the view not the same at all. There have been changes and in fact people perceive two different environments.

The two films (each 8:50 min) were shot between the stations of Burbank and Glendale in California, USA. The films are projected simultaneously next to each other with no editing. The viewer in gallery may follow and compare the differences.
- - - - -
Vlado Valkof (b. 1972) graduated the Department of Architecture at the University of Architecture, Civil Engineering and Geodesy in Sofia (1998) and the SCI‐ARC in Los Angeles (2004). He has LEED accreditation and 14 years of creative architectural practice. In 2009 he founded the Design Initiatives – an innovative and successful unit based in Sofia and Los Angeles. Vulkov has won awards from the International Academy for Architecture and the Iakov Chernikhov He is the first Bulgarian architect /designer laureate from "Europe 40 under 40" award for emerging architects. International Foundation. His projects won first prize at the Panasonic Store Front Design competition, and second prize at the UNDP competition; they are exhibited at the Beyond Media Festival in Florence. The works of Vlado Vulkov have received international recognition in such world famous publication as: GA‐Global Architecture, BELLE, Bravacasa, INA‐International New Architecture, Arch Daily, e‐Architect, Designboom, Design Indaba, Web Urbanist, Architecture Linked, Architecture List, Architecture Lab, Architecture News Plus, ArchDoc, ArchiScene, DesignScene, Morfae, Style of Design, Fancy Cribs, Design Daily, AEC Cafe, International Business Times, hc360, Zhulong, Architecture and Sport, Svobodnaia Pressa, Socializarq, Five Core, Arq, as well as in books published by Hi‐Design, Ifengspace among others.