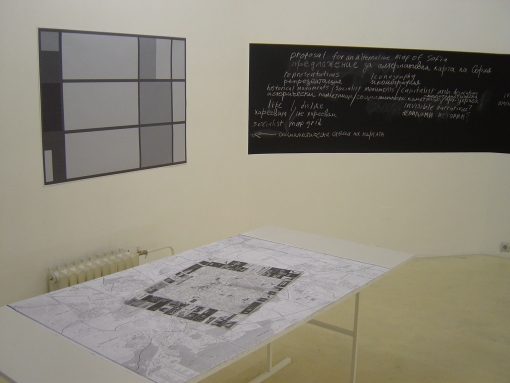 Proposal for an Alternative Map of Sofia 2004 Sean Snyder

Sean Snyder was invited to visit Sofia and the country in order to reflect visually on his impressions and to further the debate about the city’s urban environment that forms the basis for the Visual Seminar project.

One of the main insights of the artist about our city is the fact that the Sofia city maps do not match and avoid or underline different kinds of information. In ATA Center / ICA-Sofia Sean Snyder will show his new “combined” map of the city, which is based on an idea related rather more to visual culture, mental spaces and alternative architecture where the various layers of history become visible. The artist will show prints and video where various images of Sofia from the socialist period and up until now coincide.

Sean Snyder does not consider his show a self-sufficient and closed-off artwork but rather an intervention, which elaborates on the range of analysis and debate issues highlighted by the Visual Seminar project. The audience is invited to fill in the “gaps” by writing ideas on the walls, adding materials and observations as a full-fledged participant in the discussion. When the map is completed it will be printed and distributed.

Sean Snyder (b. 1972) is an American born artist living in Berlin. His interests are in the sphere of urbanism. One of his largest projects is related to the fast-food chains of restaurants that are constructing artificial settings, which are parallel to the actual reality. MacDonald’s for example, is proud with their attitude to local cultures and specifics. However, they create maps of their outlets where the cities and places lacking such outlets are missing entirely. The newer projects of the artist are related to Paris and Asia. In 2004 Sean Snyder had one-artist exhibitions in Chantal Crousel Gallery (Paris) and in De Appel Foundation (Amsterdam). He took part in numerous group projects in Sweden, Australia and The Netherlands.

Following the Austrian artists’ group Gelatin, Sean Snyder is the new artist participating in the Guest Program of the Visual Seminar project.

The Guest Program involves ICA hosting "by invitation only" two artists of international standing, for a negotiated period (up to one month), to work on or to present a specific project related to the objectives of the Visual Seminar. There will be preliminary discussions with such persons about specific topics of interest. The guest fellows would be asked to present publicly their work, to give lectures, to initiate debates and generally become part of the local art scene for a while. At the end of their stays in Sofia a show of their projects will be arranged and (based on previous agreement) the work produced in Sofia may be donated to the Visual Seminar with the prospect of establishing a collection of international contemporary art in Sofia. (So far there has been no such collection, but the important step towards it is a piece by Rirkrit Tiravanija that was donated to ICA-Sofia after the show “Locally Interested” in 1999).