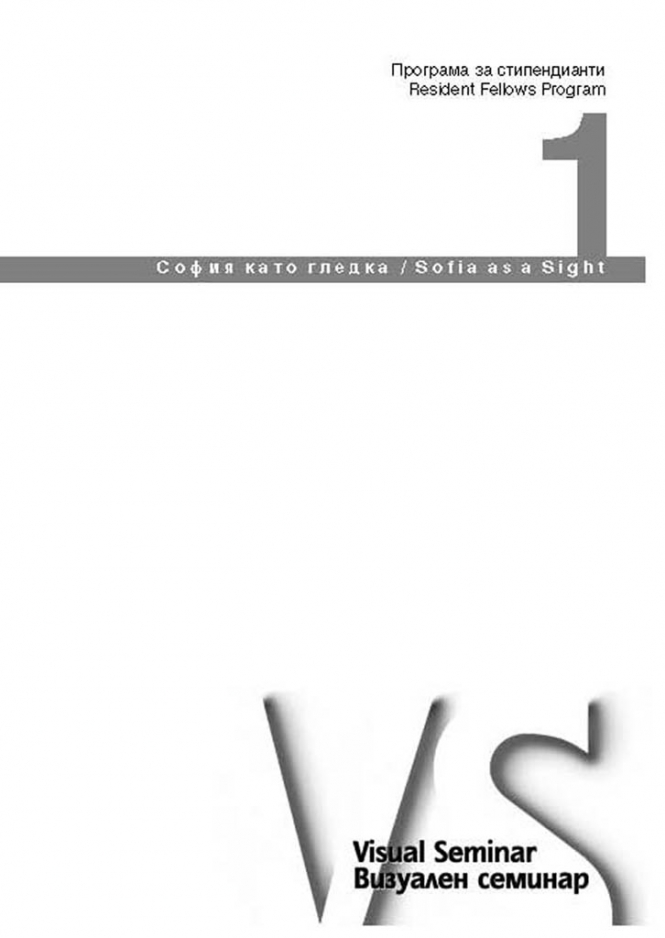 VS Resident Fellows 1/2003
Tweet
Sofia as a Sight, Sofia 2004
The issue covers the following projects: Milla Mineva "Conceiving Sofia as a Sight" and Luchezar Bpyadjiev "Hot City Visual", and includes texts by Alexander Kiossev, Ivaylo Ditchev and Ljudmila Dimova
The Resident Fellows Program of the Visual Seminar offers an opportunity for visual artists, designers, photographers, theoreticians and critics of art to develop a particular project for a period of 6 months. The program provides a stipend and a variety of neces­sary technical equipment.
In this way the program attempts to synthesize two different tasks. The first task is related to the tradition of the centers for advanced studies in Europe and the world to invite for a given academic year research fellows and also several established writers, artists or musi­cians (sometimes these are theater people, journalists, etc.). The artists receive short-term, usually three-month, fellowships, attend the academic research seminars but within this kind of program they are not expected to work on a specific project. Their presence in the academic community, however, usually turns out to be extremely beneficial since these people have highly original ways of thinking and come up with startling ideas, that could have a heuristic effect on the scientific debate. Thus, the research team becomes an intellectual community and the artists, besides benefiting from the discussions, are in touch with the really innovative ideas in the life of science.
The second task is related to the conviction of the members of the Visual Seminar that contemporary artists are also in a position to develop socially relevant projects (as is the Visual Seminar itself), as well as that an artwork or an artistic project could be incorporated within a collective conceptual framework. Thus, the Resident Fellows Program combines the attempt to build an intellectual community between artists and aca­demic researchers with the ambition that the process of working together will enrich their projects. This is reflected in the selection principle. The Resident Fellows module of the Visual Seminar must select 8 fellows in the course of two years (two fellows every six months) and at least 25% of these should be academic researchers of contemporary visual culture. The remaining 75% are representatives of all creative professions that are related to the social and visual problems of the city of Sofia: contemporary visual arts, architecture and urban studies, design, photography and other arts that deal with visual themes, etc.
An 8-member committee selected the first two Resident Fellows of the Visual Seminar in April 2003. These are the artist Luchezar Boyadjiev and the young researcher Mila Mineva who works in the field of visual sociology and cultural studies (their projects are respectively Hot City Visual and The Balkans as Touristic Sights). Their participa­tion in the research meetings of the NEXUS project (the largest project of the Center for Advanced Study Sofia that supported 28 post-doctoral fellows in 3 years), as well as the participation of the NEXUS members during the presentations of Boyadjiev's and Mineva's projects demonstrated that the scheme of this Resident Fellows Program is very promising.
Alexander Kiossev