An Inventory Book of Socialism 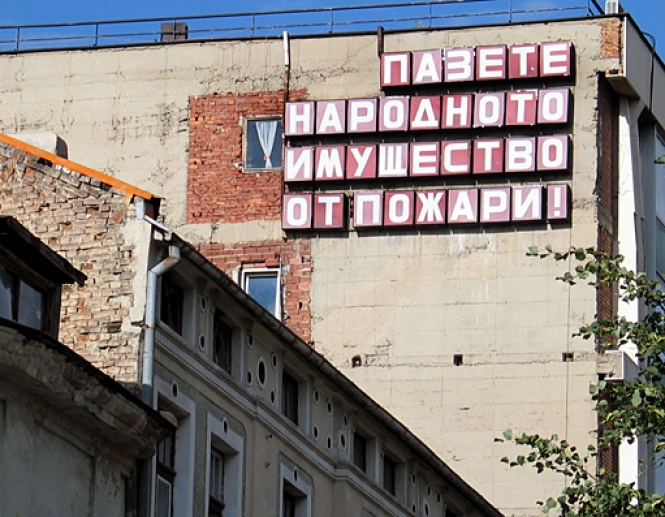 This project started by an ironically-nostalgic question of ours: Where did the lemon sweets disappeared? Or the “Golden Autumn” biscuits and the “Children Snacks”? What happened with the “Cow” chocolate and the “Chernomoretz” candies? The answer came by their reappearance. The light industry seems to have heard our question and our interest, so it mobilized the armory of nostalgia into the manufacturing powers. All those products repapered and keep reappearing in virtually the same packs which we remember from the 60s, 70s and 80s. The cliché (visual as well) is at work again, unlocking an identification chain. Without consciously articulating it, it became a part of our collective memory. In other words, it became a part of our unconscious collective memory for the taste of socialism. The no-choice situation and the lack of variety in the material culture of that time seem to have assembled us in a common narrow space. We all have tasted those goods, we remember the way they taste, we can identify it and to identify our common past through it.

Expiry date of those products appeared later than expected. Thus, the project’s idea was born out of a curios attempt to see how, whether and top what extend the taste (in a broader sense) remains a cliché, or resists it.

Another starting point of the Inventory Book of Socialism Project lays in an obvious absence, a deficit. The everyday material culture of socialism, the artifacts of its light industry - domestic goods, detergents, cigarettes, foods, etc., are not being archived, described, put in museums. They are totally absent from the poor public debate over the past. Analysts, political scientists and historians disregard them as too trivial to deserve attention so they remain out of the big historical narratives and expert opinions. The Inventory Book is to be a visual archive, an assortment catalogue of the socialist drag stores.

The project aims to offer an alternative history of Bulgarian post-60s socialism through the visual and graphic culture of the quotidian and domestic spheres, through the history of penetration of the communist project in the private urban life, through the attempt of a total unification of the socialism Man as a parallel to the economic collectivization. The project’s basic assumption is that the understanding of “mature socialism” requires a refined archeology of the material which is to reconstruct the site of the silent object in a society of continuous ideological noise. Thus, the project’s approach differs radically from the current historical and historiographicall studies of the same period which tend to interpret it by the means of the socialist history itself - by its party congresses and political events. In the same way that contemporary oral history studies the ways “the history with capital H” is being transformed, interpreted and interiorized in personal biographic narratives, the project for inventarization of the socialist material culture will try to reveal how the material relates to ideological order at work, to investigate how objects function in the socialist symbolic order and how “the banality of evil” penetrates not only by political murders, camps and moral choices but by the banality of quotidian life and its visual. Since “being determines consciousness”, a Marxian-dialectical reply is clear: there is (or there should be) a direct homology between the order of the material and the social one. Similarly to the way by which the radical transformation of economic relationships proposed by socialism needs to go hand in hand with a transformation of the domestic realm and its economy, “the mass production goods” appear isomorphic to the big Idea..

By the same token - if “every grown tomato is a nail in the coffin of capitalism” but not simply a red-color vegetable, than consuming a People’s waffle must be equal to a bodily unification with the people but not just a highly caloric food with a dubious taste?! A simple functionality as well as esthetics is necessarily doubled by its ideological (discursive) twin, by meanings well beyond the material.

In 1963 at its 10th congress the Bulgarian Communist Party raises the slogan for creating the “new socialist man” which is to be recognized by his “high cultural and material needs”, and draws up a program for development of “light industry”, targeting the end user. A centrally planned decision for increase in consumption of goods and services is paradoxically matched by the socialist economy of (again planned) deficits. If the plan for increase in consumption leads to a new focus on the visual - packages, graphic design, advertisement, interior design, it fails to actually produce a “consumer” in an economy which replaces competition with occasional deficits, its focus on the visual is a strange mimicry of the visual temptation in a no-choice situation and its attention on the production of goods cannot produce identifications through consumption as far equality is the produced everywhere. The socialist production, thus, aims not at increase of turnover and return but at “educating” and “training”; it offers not in order to sell but in order to produce “the new socialist man”.

To conclude, the project will visually present a cultural layer in the everyday material culture of socialism which had formed and deformed the taste of majority of the Bulgarian society. As we saw, the market already re-invents some of those objects; the light industry of nostalgia is already at work while we still lack a way to reflect, to interpret and to distance ourselves from those phenomena. What happens with the visual memory of the “flaneuring” consumer browsing at Billa when his “Prostor” candies are not interpretatively framed by ideological discourse but by Nestlé’s logo?

The risk and the delight in this catalogue are similar to the ones by Borges’s “Chinese encyclopedia”. It is worth the attempt precisely because it can produce a play of associations, destabilization of hierarchies and clichés, of all “habits of the mind” as Foucault would say.

The project’s final product is to be a catalogue, with predominantly visual material - packs, goods, elements of socialist domestic interior, covers, patterns, etc., and short texts. It will rely on the visual shock, on momentary identifications and contra-identifications, on sudden recognitions of the “visual subconsciousness” of socialism.