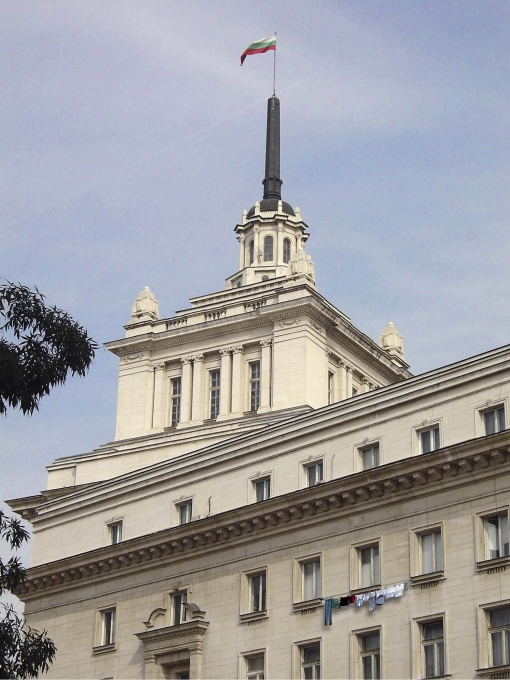 “Vizual” - 1. a specific kind of visual thinking and analytical behavior by an artist (L.B.) that is a form of interaction with the visual interface of the city of Sofia; 2. the product(s) of this kind of thinking.

In the central parts of the city the corporate logo, which is positioned high above eye level on the roofs of the buildings, dominates the visual environment. It is shiny, does not have concrete information and in terms of semantics is voided of context, or rather, it is localized within its own context without a connection to the actual product that is offered by the particular corporation. The corporate logo commands gigantic visual space.

The in-between visual territory is occupied by a third type of presence in the visual interface of the city. That’s the Bulgarian billboard. It is a kind of visual promotion of a local business that is pretending to have a national coverage of its activities. One example is the set of billboards of the kinds of grape brandy produced in the city of Karnobat in Bulgaria, the Pearl Grape Brandy, as well as the infamous billboards of the locally produced Vodka X-taz. The Bulgarian billboard is using something from both of the above-described types of visual presence: a/ it is shiny and attractive as the corporate logo in its visual form; b/ it is vulgar and concrete in its messages just like the neighborhood logo. In this sense the Bulgarian billboard is the same type of phenomenon as the so-called “pop folk” music (the “chalga”) with its vulgar lyrics and vital, powerful music.

Such a triple layering of the city environment could also be observed in the architectural environment of the city, which however, is localized and positioned differently in terms of time - the leftovers from before 1989 and so on. This environment, especially the office and apartment building construction after 1989, is influencing the life of the city in a similar way to the ones of the logo and the billboard.

The process aspect of the project “Hot City Vizual” presupposes the accumulation of observations and visual commentaries of cases and in ways exemplified in the attached “Diary of the origin and the substance of the frame project”. It is related to the pre-condition that the context of the fellowship is one of debate and discourse rather then one oriented to single art objects.

The substance of my project “Hot City Vizual” for the Visual Seminar is to build up an “advertisement campaign” for a certain neighborhood (family) business in a corporate way within the public space of the city. And vice versa… Here I do envisage three basic promotional lines of action:

The limitations of the budget as well as the unpredictable process of getting permissions for public installment of the visual products of the campaigns presuppose additional and mixed variants of these ideas!

In as much as my project is positioned within the context of the Visual Seminar with its debates and academic context of daily work of the fellow artist, the project an additional element that is best described as “product-as-process”. Here I do envisage two lines of work/activity:

4. “Visual Hot-line for visual irregularities” - to connect to people and the media - page 15-20 of the Diary

These last two lines of work do not depend on the budget limitations but are meant to function all the time. The aim, specifically of the Visual Hot-line, is to construct a situation of a constant link and feed back between the Visual Seminar, the people and the media (individual reporters, columnists, etc.) who in this way can be stimulated to take part on an equal footing with the other participants in the seminar.

The project foresees a public presentation of the whole process and results in both public and gallery space.