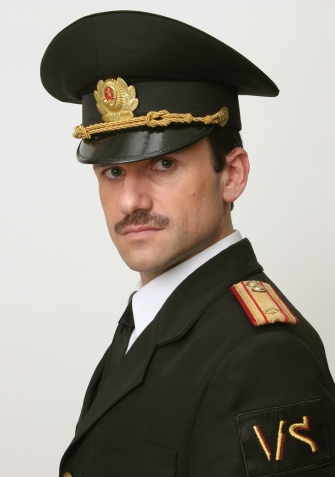 Videoinstalation, 7 simulations after the TV shows Panorama, Around the World and in the Country, Look Who..., The Day Starts of the Bulgarian National Television and Koritarov Live of Nova TV and Radio New Europe.

"Visual Police" done by Yavor Gardev in December 2005 was the last scholarship project. Working on the topic "Visual Activism: Instances and Showcases", Gardev came up with a Visual Police Code tapping into the "visual anarchic pacifism", "visual machismo" and "visual legalism" as the seminar defined a few conflicting points in the city. Dressed up as "the newly appointed head of Visual Police" while being interviewed by a few higher profile television anchors and opinion makers, Gardev actually offered a full scale TV simulation dissecting the phenomenon of television as a media skilled in substituting manipulated images for reality. Listening to those "reality just round the corner" TV reports on the new police unit actions and rants on how appropriate they are, the viewer is left with an aftertaste of having missed all previous discussions around a most serious public issue: the thin borderline between the regulation of public visual aesthetics and sacrificing public taste to administrative arbitrariness.