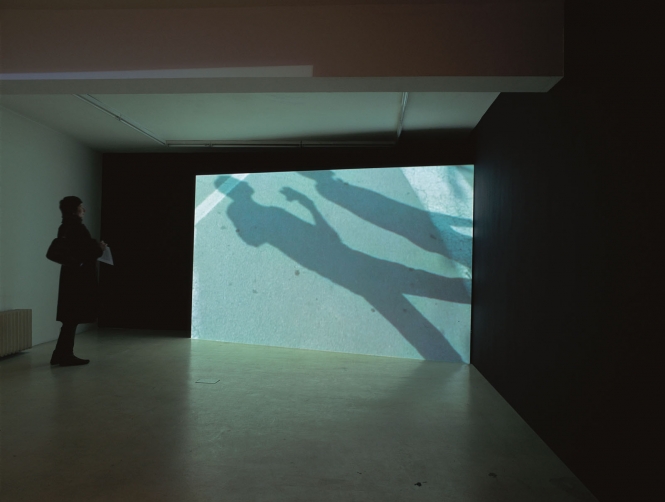 Kalin Serapionov is one of the most accomplished Bulgarian artists working mainly in the field of video art. Having graduated the painting department of the National Art Academy, Sofia in 1995, he was quick to turn his attention to contemporary photography and photo installation. Since 1997 he is creating mainly video films that are presented with remarkable success both here and abroad.

The title of the show 41’ 42’’ is actually the combined length of all three video works, which the artist created in 2004. The works demonstrate different approaches and outline the variety of expressive means employed by the artist.

“You get it?” (21’18’’) shows a story based on a traditional concept for intimacy. The two characters, a man and a woman, are talking on their mobile phones for nearly 30 minutes against the backdrop of dynamically changing urban visions. They discuss their intimate relationship – a seemingly serious subject, which is nonetheless devalued by the banality of the dialogue. The language they use is nervous, vernacular and typical for the ambient. The private space is shared – passers-by turn into witnesses of the conversation but they do not pay any attention. The viewer is in a situation of something already experienced, familiar and that’s what makes it possible to look at him/herself from a distance.

In “Pavement” (15’07’’) Kalin Serapionov is playing with the possibilities for observation and seeing. In the large city the gaze is directed at thousands of attractive objects. The artist however, is not looking at reality but at its reflection, which is materialized by the stony anonymity of the cast shadows. The video is presenting the constant visual alternation of various textures that are the surface on which dark human silhouettes are “dancing” in rhythmic succession. The gaze is transfixed by the multidimensional image and is forced to “auto focus” according the meaning of the anonymous representation.
“Why Women?” (5’17’’) is demonstrating a vision that can be located between a children’s game and a conscious violence – invisible players are throwing raw eggs at women in Sofia underpasses. The awkward situation is maybe funny at first but the comic tune if fast changing into a scary and even dramatic one. The viewer is asked to look beyond the concrete happening and to think about where does the game end and reality starts.