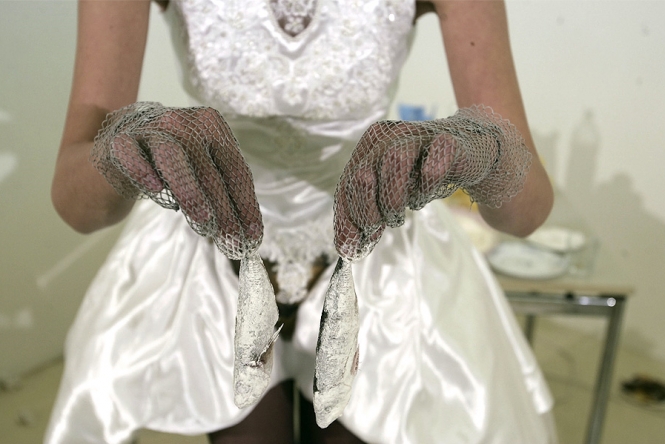 On the eve of November 1st 2004 Mariela Gemisheva, the artist notorious for her radical interventions in Bulgarian fashion design, is presenting her new performance titled Fish Party. It happens in a small gallery space that is defined both as elitist and meant for a liberated contemporary actions.
Mariela Gemisheva is once again confronting the audience with her view on femininity. In her works as well as in life actually, the quintessence of the feminine is not only the body. The atmosphere, the symbolism, the tradition are all playing distinct roles... The artist is handling the whole spectrum of possibilities while braking it down to the “obvious” color, taste, and smell. Then she is adding the accessories that are actually metaphors – just think of her fish-related works. One of them started from a collection of ethnographic essays – the “Hello, Girls!” (1997) performance, another one – with fish in the hair (1998).
The fish, the real fish (and its smell) is now participating in the performance right from the invitation card. However, it leaves the materialization of the vulgar and erotic folklore, which claims that women smell of fish, and ends up in the frying pans of the dressed up models, these dream objects of the victorious contemporary femininity. What does Mariela Gemisheva actually want? The super-models becoming earthly creatures and serving frayed fish, or the fish becoming a constant accessory of haut-couture?
More photos from the performance Here