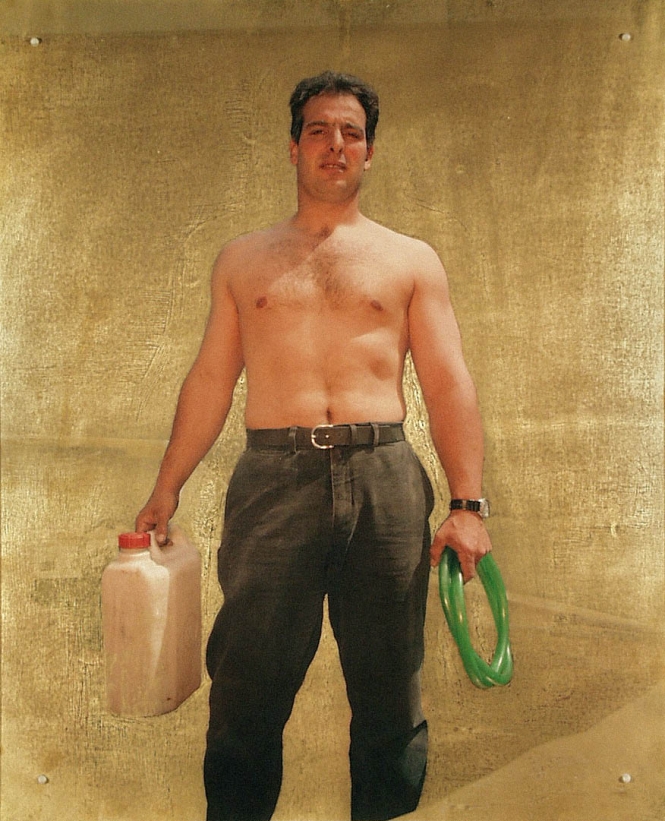 The idea behind “The Saints from Giudecca Island”, 2003 is to create a cycle of “contemporary icons” of the people who work and live on the island opposite Venice. Italy is a country of saints, miracle and cathedrals. Giudecca is the island of the banished, the communists, and the proletariat. Boris Missirkov and Georgi Bogdanov are trying to find their own saints among the ordinary people. They are making portraits of the pensioners, the butchers, the bartenders, the fisherman, the people on the street and the visitors to the local pubs. The exhibitions represents 14 gilded and covered with Plexiglas digital prints accompanied by sound that is mixing parts of interviews and sound typical for the island. Voices remain anonymous while creating a stream of associations, local idioms and dialects as an addition to the “portrait-icons”.

The cycle “Off-Season Guide to Giardini”, 2003-2004 is composed of 12 prints on hand-made photo paper. Boris Missirkov and Georgi Bogdanov are investigating the area around the pavilions of La Bienale di Venezia after the show is over. The location looks like a deserted vacation village, which could be located anywhere – Yalta, Varna, Brighton. Some of the buildings look like ancient Aztec temples hidden in the jungle; others have become a shelter for the homeless, and some are still preserving the memory of something that has happened a while ago.

The sensation of time and location seems to be absent. The buildings do not belong to the sightseeing register of Venice. They are rather fragments from various national identities gathered together in the same place. The whole looks like no man’s land, a mixture of cultures, periods, and styles.

The photographs are extremely precise and look like the architectural or the documentary photography from the archaeological expeditions from the 19th century. Following the tradition of the illustrated albums of natural history, the artists have selected texts to go with the images – quotations from travel diaries, anthropological and historical studies of the countries whose pavilions are present there. Thus building that are supposed to represent a country are turning into objects of investigation.

Boris Missirkov and Georgi Bogdanov were born in 1971. In 1996 they graduated the Department of Cinematography in the National Academy for Theater and Film. They are working in the field of photography, video, graphic design. They have founded the Bulgarian Photographers’ Association.