Excuse me, which City is This? 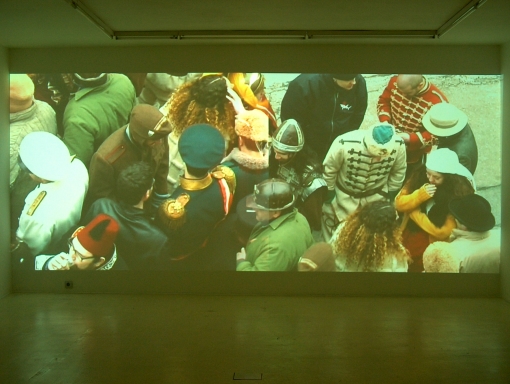 Krassimir Terziev. A Movie 2004, installation view, "Excuse me, which City is This?", Ata-Ceter/ICA, 2004 courtesy the artist
Read 9180 times
Tweet

ATA Center / ICA-Sofia and on the screens of MetroMedia at the subway stations April 9 – May 7, 2004,

“Excuse me, which City is This?” is a visual investigation on urban everyday life world of a city in crisis (Sofia, capital of Bulgaria).
The project studies the processes of atomization of the urban geography, architecture and logic of production of social space. As a result the city falls apart in a fragmented sequences of spatial organizations, each with its own logic, rhythm and rules. Sofia does not exist! It is a pale abstraction projected by the institutions, which does not stand the challenges of “real life” flux. There are only fragmented places where traumatic memory (or lack of it - amnesia), imagination, dreams and pressures of everyday needs create permanent mutations of spatial reinvention and redefinition. What is interesting is the human use, interactions, and appropriations of space.

“Excuse me, which City is This?” includes:
series of photo-montages, representing mutated creatures (stray dogs), as the only element identified with all the areas of the city;
three videos with a docu-fictional scenarios (“A Place”, “A Market”, “A Movie”); slide show; short video spots on the screens of MetroMedia in the stations of the Subway;
web-site: http://www.cityscales.net
Main part of the project is intervention in the public space through projections on the screens of MetroMedia in all stations of the Subway. The appearance of the short video spots aims to provoke the public attention and to evoke a dialogue about the crucial points of the existence in the city.