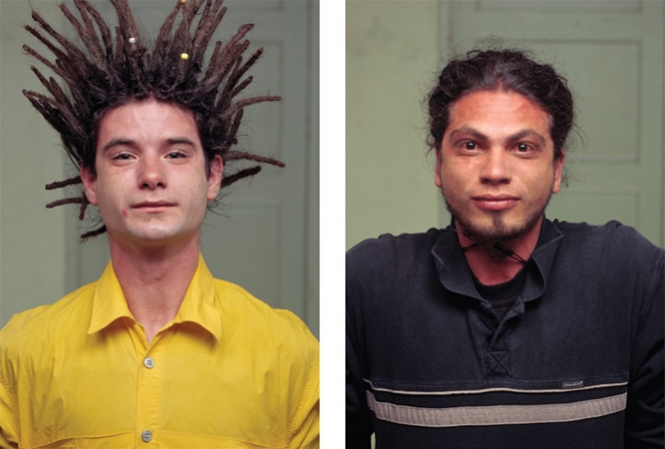 We are used to taking for granted everything around us. The objects, the everyday life situations, and even people close to us often have the status of a constant presence. However, what will it be like if things are not what they appear to be at first glance? What if we all of a sudden we have the chance to see that all these things are completely different, or simply upside down? This is a rather real perspective and a legitimate practice in visual arts for the young artist Samuil Stoyanov in his show “Reverse” in ATA Center/Institute of Contemporary Art. The artist is showing a cycle of large-scale portraits in color photography of his friends and a video film, which is shot through the rear window of a moving tramway. At first glance these objects are not offering anything new or unusual. After a more attentive look though one discovers that there is something out of the ordinary about all these faces of people on the walls. The faces have been transformed and deformed. They have been literally turned upside down because the artist took the photographs while the people are “hanging” from the horizontal bar for gymnastics. Afterwards the photographs have been exposed upside-down once again, while skillfully avoiding the telltale downward drive of the models’ hairs. It is not easy to figure out the procedure of photographing. The result consists of strangely deformed faces while the barely restrained dynamic, tension and expression is visible behind the static bodies. The tramway in the video film is not moving forward as we may have thought at first. It is actually moving backwards… All of a sudden the peaceful summer day is turning into something unusual, wrong, even threatening. This is the first exhibition where the 28-year-old Samuil Stoyanov is using photography and video to express his ideas. Until now he was known mainly with his paintings that were shown in his two previous one-artist shows titled “Merry Christmas and Happy New Year!” at the end of 2003 in the Sofia Municipal Art Gallery and “City” in the 100+1 Gallery in 2001. He has graduated the Ceramics Department of the National Art Academy in Sofia. The “Reverse” exhibition is realized with the support of the Fund for Debut projects in the field of contemporary art and culture” of the: National Fund “Culture”, the Swiss Cultural Program in Bulgaria and the Soros Center for Cultural Policies-Sofia.

More pictures and info about Samuil Stoyanov at www.samuilstoyanov.com