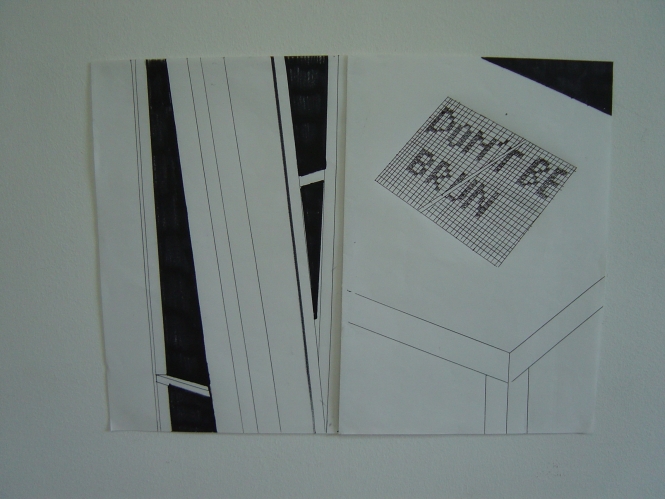 The young Basque artist from Spain Maite Yurrebaso Picaza is showing two cycles: drawings and photo collages. The drawings are composed of separate sheets often connected by a single colored line. Thus different viewpoints and visions are constructing a unified space. In the photo collages it’s the opposite. The photograph, this “most true” image of reality, is disintegrating after the unexpected intervention of foreign elements. In the artist’s own words, “The use of minimal and even “surgical” ways of drawing allows me to approach the problem of representing space as well as to test how different elements are behaving there. My process developed from this starting point and became more and more composed. Stories are constructed as a result of combining drawings with each other. The latest photo collages deal with the new image produced after I intervene in the initial photograph. That which was captured by the camera interacts with the superimposed image and “what we see is not what it seems to be”. Maite Yurrebaso Picaza is born in 19981 in the city of Bilbao in the Basque Country in Spain. Since 1999 she is studying sculpture in the University of the Basque Country in Bilbao, Spain. In 2002/03 she has been living and working in Sofia with a one-year stipend from Erasmus, the European Foundation for Students Exchange. She is studying in the class of Prof. Andrei Daniel in the National Art Academy. Modus Operandi is the fourth exhibition from the long-term program of the Institute of Contemporary Art-Sofia in ATA Center. The show is installed in the newly created space of the gallery for small-scale projects.