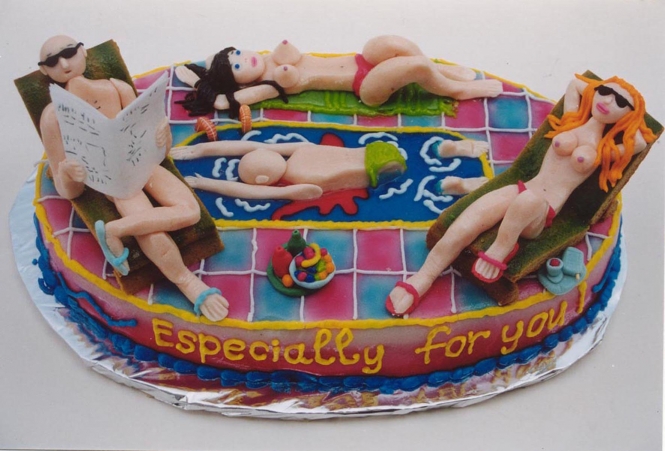 In her new show Alla Georgieva is presenting a cycle of 6 posters “Power and Play” (the logo of childrens' toys) where boys aged between 4 and 15 are advertising various brands of fire weapons as well as three birthday cakes “decorated” with scenes of violence. The artist, known for her critical attitude to contemporary life, was “inspired” by the optimistic motto “Come with us into the Future” used to promote in Bulgaria the latest model of the Walter-R-22 shot gun.

She is posing questions about the “bright future” where weapons have become mass commodity and as each popular and saleble mass commodity, they need good advertisment. This happens both directly and indirectly. In Internet and the computer games for instance, children build up their own imaginary world of heroes and victims. There the weapon is just a beautiful, accessible and faultless toy. You pull the trigger and all problems go away. Alla Georgieva claims that children have been forced to play the games of the adults. A proof to that is the statistical data that today at least 300 000 children are used as soldiers around the world. The new phenomenon of our time is the killer-kid and there are new cases every day. Weapons become a deadly toy. The visual basis of the cycle is an image she found on the Internet where a small boy proudly posing with a real weapon. The cycle is a simulation of advertisement with immediate warning power. Additional argument is provided by samples from website such as: “A kind word and a gun will get you more then just a kind word” (from a Bulgarian site for weapons); “According to eyewitness accounts, children make better soldiers. They are brave and obedient, they do not ask questions. They are easy to suppress and punish. Some of them take war as if it's a game. In the last years with the availability of easy to use weapons, children are used within the striking force regiments”. (www.vokruginfo.ru)