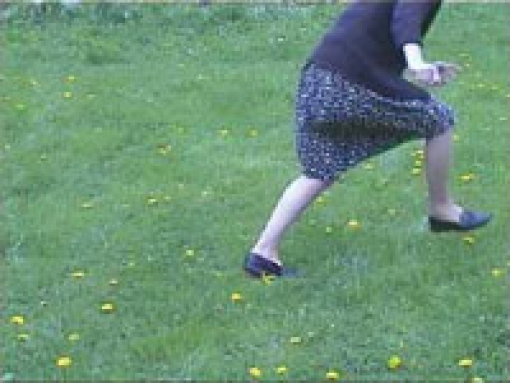 Adriana Chernin was born in 1969 in Sofia, Bulgaria. She lives and works in Vienna. Her professional career has developed in Austria. Among her personal exhibitions are shows in Linz, Vienna, Cologne, Wiesbaden, Crems, Bonn, Paris as well as the Massachusetts Museum of Contemporary Art, USA. She is working in partnership with the prestigious Viennese gallery Raum Actueller Kunst_Martin Janda. This is her first personal show in the city where she was born.

Adriana Chernin is working in the field of drawing and video. In Sofia she is showing how her artworks incorporate these two seemingly very different genres. The exhibition consists of large size drawing with color pencils and short video films, which have been created during the last two years and capture the actions of the artist in endless loops. The surface of the drawings is covered with ornamental motifs that envelop a female figure. According to the art critic Catharina Kahane, the figure is shimmering against the background of the drawing due to the color and space effects much in the same way it is moving within the fast and, as if improvised video works. While the drawings of this artist are restrained by the shape of the sheet of paper, the frame of the screen in her video films is used in order to separate and accentuate the concrete space.

The artist is interested in the female image as an object and a metaphor. With a touch of irony, the artist is stamping flowers in a field like a sulking child thus braking up with the cliché of the woman, as beautiful as Flora under whose sparkling steps flowers are blossoming (Catharina Kahane). In contrast, in the drawings the woman is captured by the beautiful cage of the flowers as in the cliché.

The exhibition is initiated by Raymonda Moudova and the ATA Center for Contemporary Art, and is organized with the support of the Austrian Embassy in Sofia, as well as the Raum Actueller Kunst_Martin Janda, Vienna.

The opening will be attended by the artist, His Excellence Dr. Carl Diem, Ambassador of Austria, and Mr. Martin Janda.