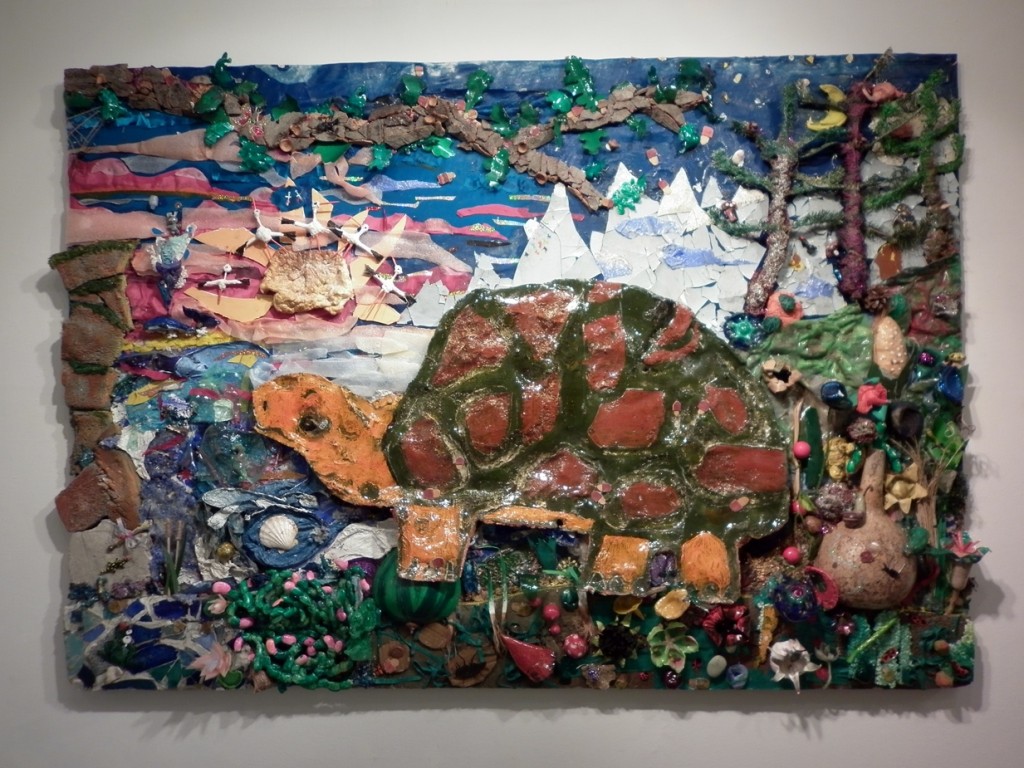 “The forests are getting ever narrower and lower. The forests are disappearing. The forests are burned, drowned, and slaughtered. There is a shortage of forests.“
The last thing this fairytale will be telling about is greenhouse gas emissions and the glacial ice meltdown. If there are such emissions or some kind of meltdown, these are seen and told through the prism of a boring adventure in the bushes, which is caused by the fact the animals are forced to live like the humans.
The main character of this story is Milka, the Turtle.
Tossed around by her hard life, Auntie Milka settles in the Stony Forest where she starts gathering acorn in order to buy a hollow in a tree all for herself. Later on, her nephew Marcho, the Patagonian hare who loves to dream a lot, will come to help her in coping with survival.
The book involves illustrations and the originals will be presented in the exhibition. Valko Chobanov is the curator of the project.
Our gratitude goes to ICA-Sofia, Vashti Bunyan and all those who helped in the realization of “Auntie Milka”.
The world premiere of the fairytale will take place on Friday, April 13th after 6 pm in the ICA-Sofia Gallery.”
This exhibition is the post-BAZA Award report showing of the works of Dimitar Shopov.
- - -

Dimitar Shopov was born in 1980 in the town of Kardzhali, Bulgaria. In 2007 he took MA in “Scenography” from the National Art Academy in Sofia. He has worked on a variety of theater productions in Sofia Theater, Sfumato Theater and others as a stage designer.
He has 4 solo shows, three of which with the L’unioin de Paris Gallery in Plovdiv (2012, 2013, 2014). His latest solo show was in 2017 with SARIEV Contemporary in Plovdiv. He has participated in manu group shows in the country and abroad. Some of these are: “My Dear Provincials”, Swimming pool, София (2017); „Let them draw”, SARIEV Contemporary, Plovdiv (2016); „All I Can Do is Art”, Prague (2013); „Gavazov and his time”, at “Near, Closer, Together” Sofia Contemporary Festival, Sofia (2013).
Among his realized projects are the “Auction of Bulgarian avant-garde art, Gavazov and his school – originals”, a performance by Vera Mlechevska and Dimitar Shopov at the NIGHT of museums and galleries, Plovdiv (2014); “Gavazov”, a performance part of the Otez Paisii – Text” festival which was shortlisted for the Gaudenz B. Ruf Award for New Bulgarian Art (2011) and many others.
During the last 10 years he dedicated his attention to research on the life and work of the artist Gavazov and the search for artifacts related to him.
In 2012 his book – an album dedicated to this artist was published and won the “Southern Spring” Literary Award for Prose.
Dimitar Shopov is the winner of BAZA Award for Young Bulgarian artist for 2016.