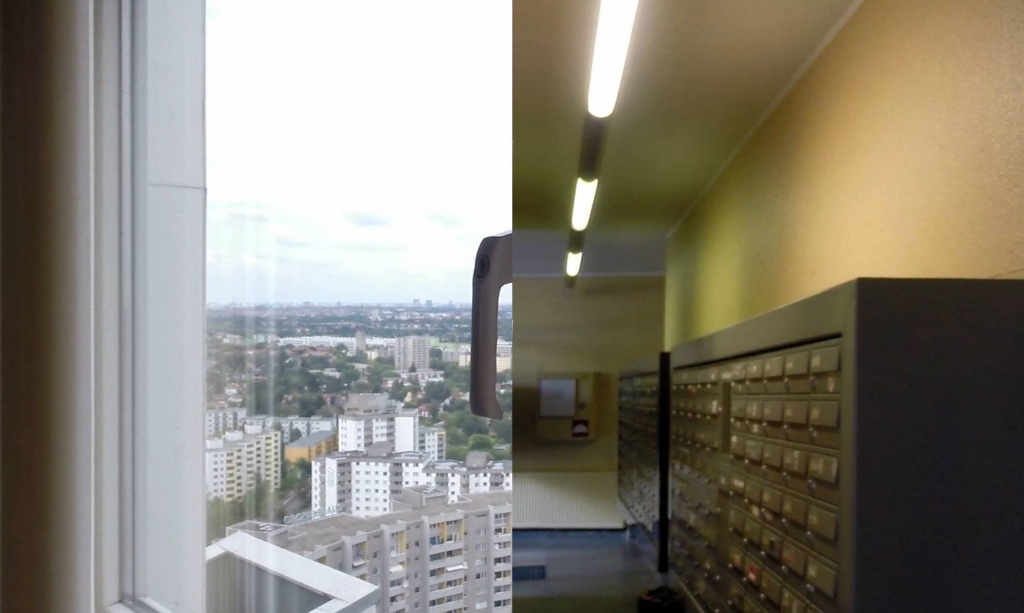 Co-produced by Goethe-Institut Sofia, with the kind support of Baugenossenschaft IDEAL

Ghost Descending a Staircase is a video work, one of the results of the collaborative research undertaken by Daniel Kötter and Krassimir Terziev in the urban peripheries of Berlin and Sofia in 2016. The film was shot in the 31-stories high-rise called the “Ideal Hochhaus” in the Gropiusstadt district of Berlin. This part of the city is named after the famous founder of Bauhaus, the architect Walter Gropius. He designed both the district in the 1960ies and the high-rise in 1969.

The film is constructed in direct dependence on the architecture of the building which is providing for the fluid logic of the camera movement. All the windows and doors that one must negotiate by foot while descending from the top floor to the ground level of the structure reveal astonishing alternations between exterior and interior views; they are managed through complex foreshortenings animated by the only moving elements in the architectural setting.

Ghost Descending a Staircase appeals to our sense of rhythm and to the eye’s ability to register spatial transformations that we are not accounting for actually. Thus our eyes are able to investigate the beauty of the functional and pragmatic architecture whose origin is rooted in the Bauhaus school’s work. The title of the work is meant to underline its linkage to modern art while following its steady interest in the substance of life – movement.

The authors of the video are referencing some of the most famous works of modern art – the chronographic experiments (shooting movement with several cameras positioned at regular intervals) by the British photographer Eadweard Muybridge in Woman Walking Downstairs (1887.) Of course, most obvious is the reference to the famous proto-futurist painting by Marcel Duchamp, Nude Descending a Staircase, No. 2 (1912), which had caused such a scandal at its premier showing; and there is also the great painting Ema (Nude on a Staircase), (1966) by one of the most important painters of today Gerhard Richter.

However, the “film about movement” by Krassimir Terziev and Daniel Kötter is liberated from the human figure thus providing the viewers with the purified sensation of moving through space. The reduction of the traditional subject is thus awarding a certain poetic and philosophical character to the sensation of mechanical changes of one’s position in time and space – movement is aknowledged as a crucial feature of existanec, and as a tool for the understanding of the surrounding world.

The artistic collaboration between Krassimir Terziev and Daniel Kötter does not consist only of the work showcased at the ICA-Sofia Gallery. Another joint work, which is based on their research in Sofia and Berlin, will be presented at the exhibition Peripheral Light, Air and Sun at the Goethe-Institut in Sofia between February 24th and March 10th, 2017.

Krassimir Terziev is a visual artist. In his work he explores the manifold transitions and tensions between a globalized world, dominated by the overwhelming multiplicity of symbolic imagery, and its material groundings in technological, physical and human ‘hardware’.

He holds a Ph.D. in Cultural Anthropology from Sofia University (2012) and an MA degree in Painting from the National Academy of Fine Arts, Sofia (1997.) His artistic work has been exhibited in numerous individual (Between the Past that is About to Happen and the Future that has Already Been, the National Gallery, Sofia / Dobritch Art Gallery (2015); Cosmopolis, ICA-Sofia, Sofia (2013); Background Action, Württembergischer Kunstverein, Stuttgart, Sofia City Art Gallery (2008/2007)) and collective exhibitions around the world.

He is the author of Re-composition. Author, Media and Artwork in the Age of Digital Reproduction (2012, “East-West”/ICA-Sofia).

Daniel Kötter is a director and video artist whose work oscillates deliberately between different media and institutional contexts, combining techniques of structuralist film with documentary elements and experimental music theater. It was shown in numerous galleries, video festivals, concert halls and theatres all over the world.

Between 2013 and 2016 he developed the film and music theatre trilogy Ökonomien des Handelns: KREDIT, RECHT, LIEBE (with Hannes Seidl).

His series of films, performative and discursive work on urban and socio-political conditions of theatre architecture and performativity has been under development between 2009 and 2015) under the title state-theatre: Lagos/Teheran/Berlin/Detroit/Beirut/Mönchengladbach (with Constanze Fischbeck).

He is currently working with curator Jochen Becker (metroZones) on the research, exhibition and film project CHINAFRIKA. Under Construction. (2014-2018.)