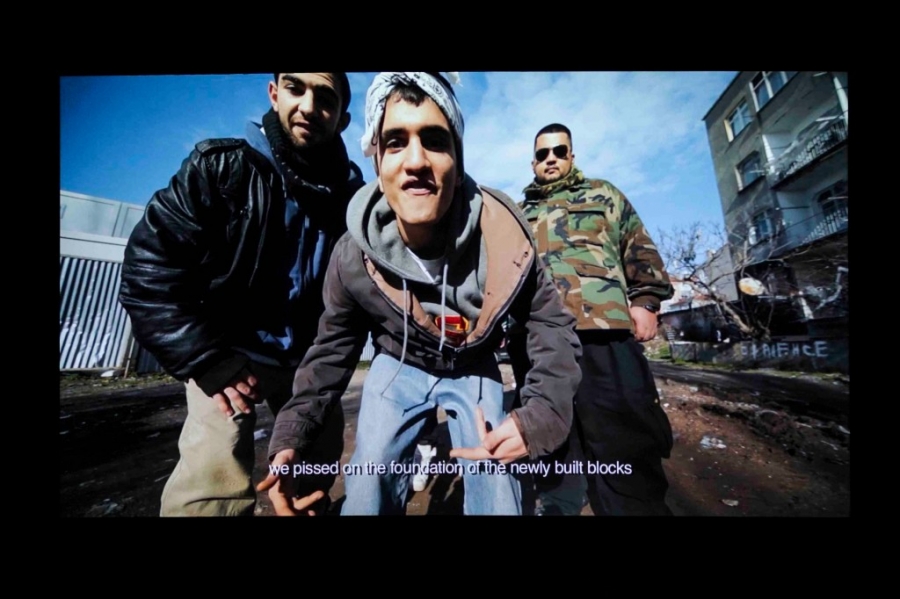 The video work Wonderland (2013 is a powerful document of urban anger, resistance and hope voiced out by the teenagers of Sulukule, a neighborhood in Istanbul which has been the home of Roma people and their culture for six centuries. Demolished in 2006 as part of a supposedly "promising" urban transformation project, the lost neighborhood is seen in the video as a motive for social-performative action against the kind of city redevelopment that has been the focus of recent demonstrations and resistance all over Turkey.

Altundere is using a new cinematic language located between the video clip and video art to display how one subculture (hip-hop) can enlighten and make extremely public another subculture (Roma). Equally the product of the emphatic visual language and the dynamic "electrical" performance of the group Tahribad-i İsayan the video is a powerful hit to the viewers' awareness and imagination.

By problematising a diverse range of identity politics and resistance strategies against power structures, the artist turns inside out everyday topics and historical moments that involve current politics. He often rejects the politically correct viewpoints while emphasizing the inherent relationship between art and politics.

Shown in Sofia at this time of continuous political turmoil in the country the work bridges cities, political concerns and human agenda that established a common ground for civil action in the region.

Halil Altindere (b. 1971 in Mardin, Turkey) has shown extensively all over the world including such major events as Documenta 12 (2007), Manifesta 4 (2002), Kwangju Biennial (2002), Sao Paulo Biennial (1998), Istanbul Biennial (1997) among others. The name of Halil Altindere is closely linked to the growth and expansion of the Istanbul art scene after the middle of the 1990ies. He has been a crucial and influential member of this scene ever since 1996 when he moved to the city. His work as an artist, curator, publisher and activist focuses on ironical, humorous and highly efficient resistance to repressive structures of political, cultural or historical substance as well as to the marginalization of cultures and subcultures within the official system and its languages of representation. His work has always been closely linked to the life of the city and its energies, agenda, and fights.
- - - - -
Courtesy to the artist and Pilot Gallery, Istanbul.