A SWORD AND A ROSE 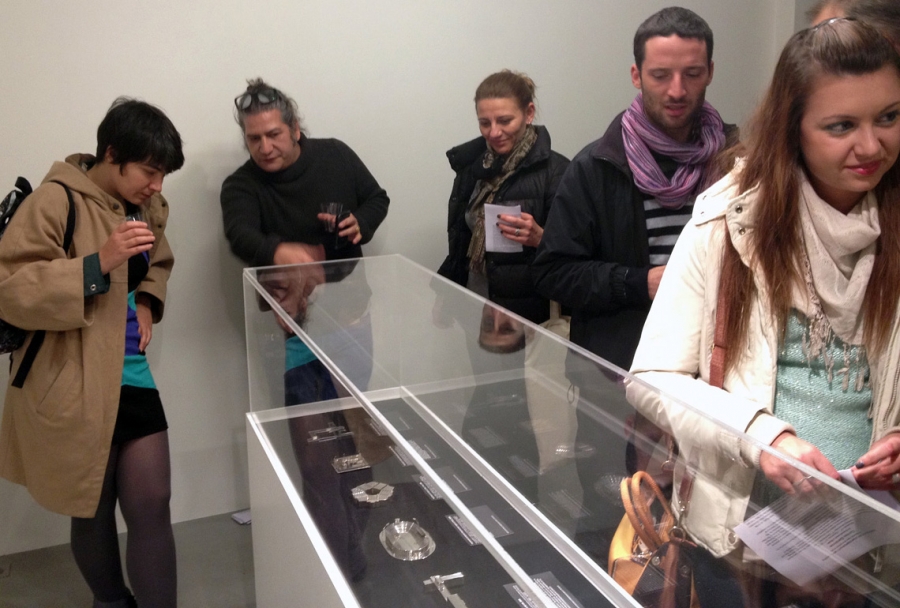 Carlos Garaicoa is one of the most famous artists from the generation "after the wall" who found their visual language in the time of breaking value systems, overcoming stereotypes, and the transformation of political, social and cultural notions for great masses of people. Through the use of a multimedia, multidisciplinary approach and an ever present sense of humor, Garaicoa is investigating political narratives, historical illusions, and urban utopia.

The show 'A Sword and a Rose' is showcasing works from different periods thus continuing our established practice to present mini-retrospectives.

The Crown Jewels (2009) is a collection of miniature architectural copies made out of precious metal, of famous sites of intelligence agencies and locations, where interrogation and torture took place. Among these are the US Naval Base in Guantanamo (Cuba), the building of the Pentagon (Washington D.C.), the KGB and STASSI headquarters (Moscow, Berlin), the stadium in Santiago (Chile). They were created by Internet information, which is systematically restricted by the authorities. The language of the Cuban socialist time badges – those tools for ideological advertisement in their own time, their symbolic and messages are investigated in the installation Without Solution (2012).

The poetry and the ambitions of that architecture which claims eternity, specifically, or of the relatively unstable human communities are explored in the photographic cycle titled When Desire Resembles Nothing (1996). The work is dedicated to New York and Havana, and after the disaster caused by the hurricane Sandy has acquired strong philosophical connotations.

Famous for his projects in open space, Carlos Garaicoa is showing in the ICA-Sofia Gallery a film about his installation I do not want to see my neighbors anymore II (2006), part of the Collection of Contemporary Art Castello di Ama in the Italian province of Tuscany. The installation itself reconstructs in miniature famous historical walls – from Hadrian's Wall in Britain and the Great Wall of China to the Berlin Wall and the one in Tijuana, Mexico. The film shown in Sofia is composed from documentary footage and arguments about the constant need of societies to separate from the other.

Carlos Garaicoa was born in 1967 in Habana. He lives and works in his home town as well as in Madrid. Before transferring to the Instituto Superior de Arte in Havana, he was studying thermodynamics. Among his most recent one-artist shows are 'L'Optimiste', Le Moulin, Galleria Continua (2012); 'Photo-topography' in The National Museum of Contemporary Art, Athens (2011); 'Overlapping', Irish Museum of Modern Art, Dublin; 'Land in Abeyance', Museum of Modern Art, Medellin, Columbia (2010). He has participated in numerous international shows among which Documenta 11, the 51st and 53rd La Biennale di Venezia, the biennials in Moscow, Sharjah, Havana, Gwangju, Johannesburg, as well as Art Unlimited and Art Basel.

Among the most important public art collections that have his works are the MOMA (Museum of Modern Art) in New York, the TATE Modern in London, the Guggenheim Museum in New York, the MOCA (Museum of Contemporary Art) in Los Angeles, the National Museum Centro de Arte Reina Sofía in Madrid, among others.
www.carlosgaraicoa.com

The show is realized with the support of Galleria Continua, San Gimignano – Beijing - Le Moulin.