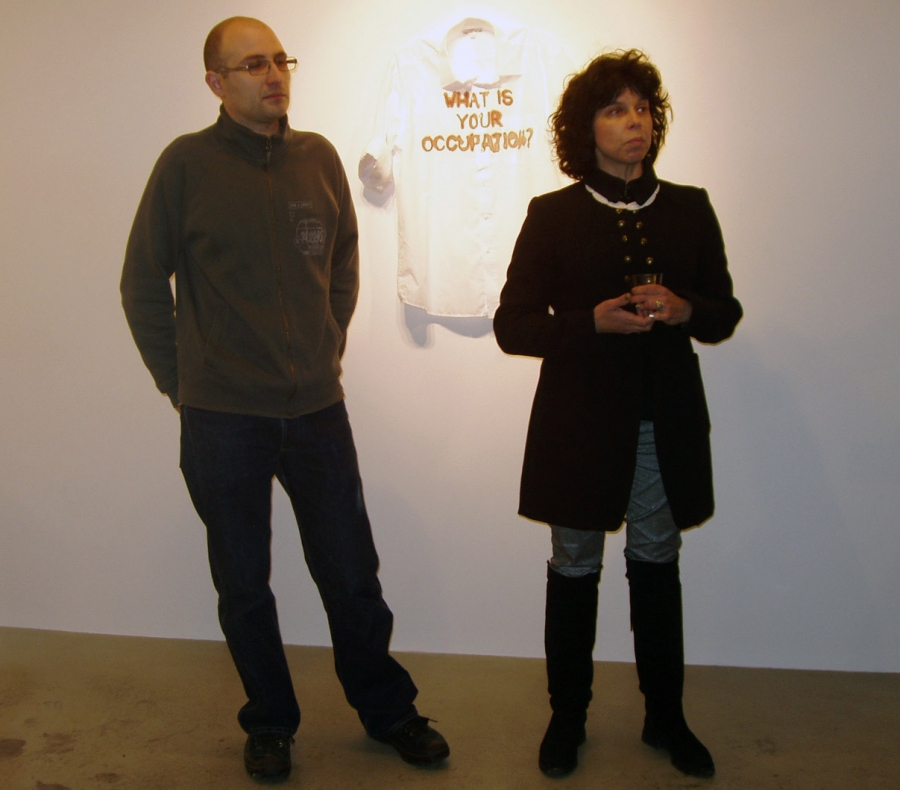 The exhibition of Anton Terziev (b. 1977) in the ICA-Sofia Gallery is a result of his 6-week artist's residency with the International Studio and Curatorial Program in New York as the 2010 recipient of the BAZA Award, an initiative of ICA-Sofia realized in cooperation with the Foundation for a Civil Society (USA) and Sofia Art Gallery.

The exhibition presents objects and videos that are sharp criticism of the society of today where the individual is desperately searching for ways to fit into the often absurd societal manifestations and behavioral patterns. The prosaic question of "What is your occupation?" (a line of work as well as a position) has been written with blood on a formal white shirt. It is addressing not only issues of profession and how ones is making a living, but also the ethical, civil and even physical projections of the human being in public space. It is also a reminder of the current Occupy Wall Street political movement and the street demonstrations against the culprits of the financial crisis, which originated in New York and quickly spread around the world.

Urged to take an active position, the viewer may leave all unneeded qualities and inhibitions in the "Boarding House for Angels and Demons". Just like with house pets, the viewer may later reclaim these in case of future necessity. In the meantime the viewer can see two video works titled „When I Appear It Disappears". The videos juxtapose Times Square with the tourists - constantly besieging its space while disturbing the normal daily routines of the locals, with Central Park – a supposed place for rest and relaxation, which however many New Yorkers are constantly crisscrossing in a healthy jogging mode... The viewer may also appreciate the business plan of the Orthodox Church with its aggressive merchandising in "Product Placement"; or watch the slide show in "HeArt Rate", which is an ironical measuring of how art works from different museum collections are influencing one's pulse. Then the viewer may compare that to the "What I stole from the MoMA" print that represents the museum guards – the only museum objects forbidden to photograph that are however nobody's object of interest or admiration...

At the end the viewer must inevitably arm him/herself with "Contemporary Tools of Labor" for the "knowledge"-hungry media sapiens of today needs a survival kit in order to invalidate, dismantle and digest everyday life bit by bit.

- - - - -
Anton Terziev lives and works in Sofia. In 2004 he graduated from the Ceramics Department of the National Art Academy in Sofia. He has had solo shows in Sofia, Plovdiv and Bratislava. In the last several years he has participated in show representing contemporary art in Bulgaria and abroad such as: Light House and the Storm, Bath, UK (2000); Discrimination, Nilon Gallery, Istanbul (2003); Donumenta, Regensburg Germany (2005); On Difference 2, Goethe Institut, Sofia (2006); The Presence of the Body, Troy, NY (2007); Disconnected People, Koridor Gallery, Plovdiv and Art Generator, Macedonia (2009); After the Flight, ICA-Sofia Gallery; NurtureArt, New York; Open Studios, ISCP, New York (all in 2011); etc.
The artist has created numerous performances, actions and presentations, some of them with the Ultrafuturo Group. He is the author of short films as well as of the books No Portrait for the Artist (Zhanet, 2007); Urban Yoga for Beginners (Siela, 2008); Local Heroes (Siela, 2010).
Anton Terziev has been awarded: by the Council of Ministers of Bulgaria for a project for a monumental ceramics work (realized together with Samuil Stoyanov, 2001); the Special Prize for Debut in visual arts by the RFI-Bulgaria program Picnic on Vesuvius (2004); and the BAZA award for contemporary art (2010).