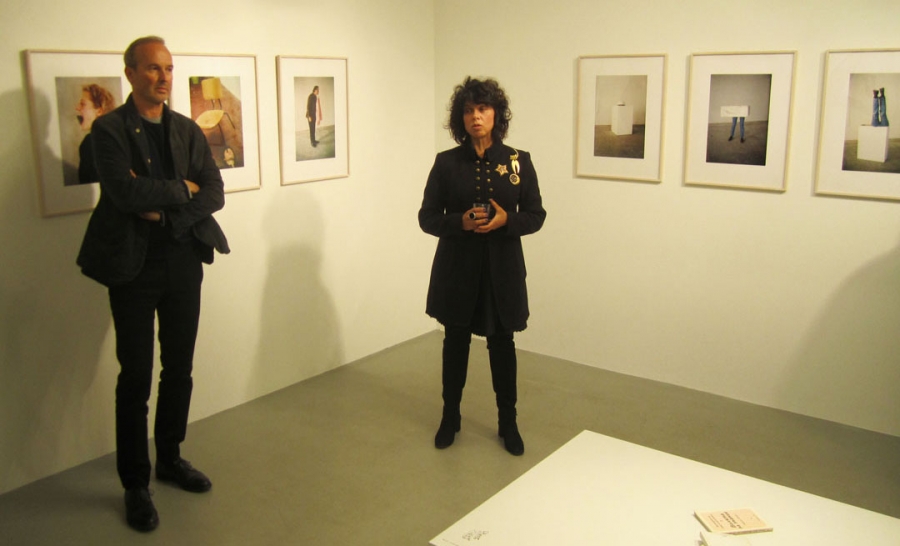 ICA-Sofia Gallery is opening its winter season with the exhibition of Erwin Wurm (b. 1954, Austria) – "the artist who swallowed the world." In the last few years among the most well known works by the artist are the "Fat Car(s)" (first one from 2002) and the "Narrow House" (2010) exhibited at the 54th La Biennale di Venezia this year. His series "One Minute Sculptures", started in the end of the 1980s, as well as the "Desperate Philosophers" from 2009 are also extremely famous.

Balancing a yellow plastic bucket tilted on top of your head; trying to stand upright while stepping on two balls with your legs slightly apart; sitting "upside down" while supporting yourself with head and hands on the floor while your feet, along with those of the chair, are pointing towards the ceiling; struggling to look decent with your mouth wide open and a pickle put across your teeth – these are but a few of the one minute sculptures by Erwin Wurm. They just cannot last much longer. The moment they are happening they are photographed and thus are preserved for the future generations...

No doubt these fast and funny forms of art present a challenge to the established notions for sculpture while investigating the human potential and reactions. Or, in the words of the artist, his works are engaging the "whole substance of the human being: physical, spiritual, psychological and political." To this purpose, he says, "it is not necessary to always be dead serious. Sarcasm and humor might help you see things in a lighter way."

In tune with the style of Erwin Wurm, the "Micro-Retrospective" at the ICA-Sofia Gallery is an attempt to be ironical with the obvious. Usually the shows of this artist take over several floors and entire museum buildings since his works have the dimensions of the actual cars and houses. The idea of the ICA is that this show will represent in a deserving way the whole massive oeuvre of the artist within 50 sq m of exhibition space. The photographs from the "One Minute Sculptures"; the video films "59 Positions" (1992) and "Am I a House?" (2005); the sculpture describing the delicate relationship between two Viennese museums – the Leopold and the MUMOK; the absurdist performances with the participation of the audience, along with an original drawing from the collection of Nedko Solakov offer a clear image for the life and the work of one of the currently most famous international artists.

The celebrated and highly praised (literally as well as metaphorically speaking) artist has had over 80 one-artist exhibitions on all inhabited continents during the last decade alone. For 2011 the CV on his website http://www.erwinwurm.at lists the "Micro-Retrospective" at the ICA-Sofia Gallery next to shows in the Netherlands, the USA, Belgium, Denmark, France, Portugal and Austria.
Works by Erwin Wurm are in museum collections in the USA (incl. The Solomon R.Guggenheim and the Judith Rothschild Foundation, New York; in the states of Minnesota and California; the cities of Chicago, Buffalo, and Washington D.C.); France (incl. the Centre Pompidou in Paris); Austria (incl. MUMOK, Vienna); Belgium, Canada, Germany, Italy, Japan (incl. the National Museum of Art, Осака), Mexico, the Netherlands, Switzerland, Australia, etc.