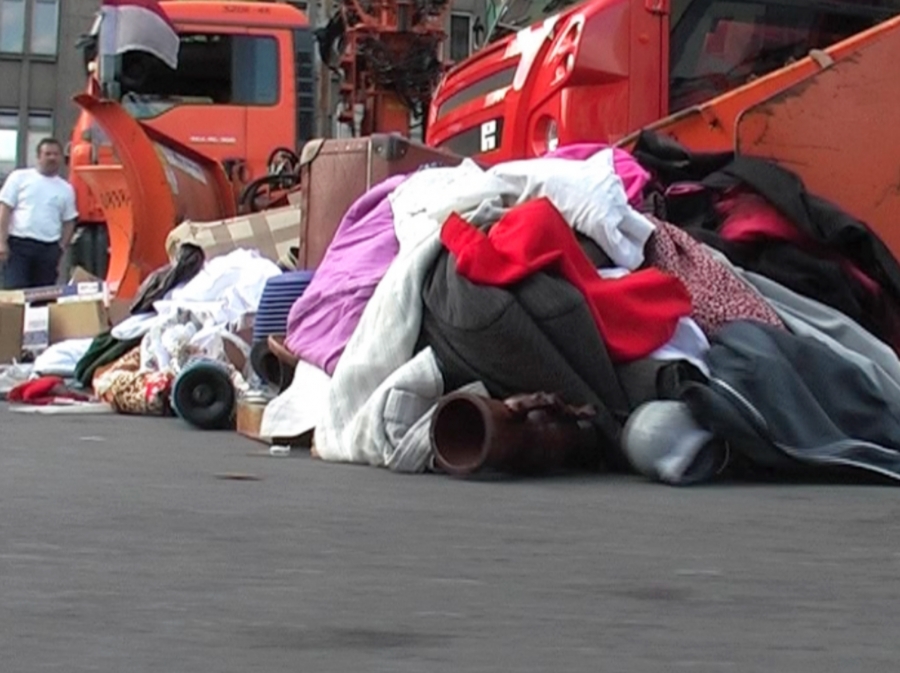 Anna Jermolaewa seems to have the incredible intuition to be at the right place at the right time in order to “discover” here stories that are documentary in substance. The straight forward approach of her camera has clarity and legibility; it creates the very attractive for the viewer sensation that he/she is seeing everything with her/his own eyes. However, the documentary approach is only meant to function as an introduction into the work from which point the space of narration is braking through. Then the viewers start to read, reconstruct or build up the story through their own emotions and interpretations.

The two-channel installation “Step Aside” (2006-2008) is showing how at the end of the working day on Nashmarkt, the famous Viennese street market a bulldozer is removing everything that had been unsold. In only seconds all the pieces of merchandise that may still be useful for somebody are transformed into trash – a giant and threatening heap of recently discarded objects of desire. The “Five-year Plan” (1996) is a project in progress – every five years the artist is photographing the escalator of the same subway station in her native town. She seems to be observing impartially the seeming lack of change. Unavoidably the viewers are looking for differences in the behavior of the people in the image, in the advertisements surrounding them, in the speed of movement, even in the safety instructions – not only to account for the passage of time but alos because of the logic and meaning of life within that time.

The most recent works of the artist are also presented in Sofia. In the video “In/Out” (2011) the camera is shooting a set of bookshelves full of quite little objects, souvenirs and books. The camera pulls away to the farther distance and we understand that this intimate corner of somebody’s living room is in fact part of a semi-demolished building that has been stripped bare and transformed into an object of public scrutiny perhaps by some horrific disaster… In the two-channel installation “Clouds” (2011) the beauty which we see through the illuminator of an air plane starts to fill up the interior space of the cabin in a strange way. Although the passengers remain indifferent to the rising fumes, the sensation of distress is building up as if in a romantic symphony with a techno (due to the sound of the plane engines) feel.

The oldest work in the show is “”Switch On/Switch Off” (1999). It is an ironical comment on one of the oldest cliché in the world – masculinity. An erected penis is pressing the light switch – the light comes on in all its might and beauty and then it disappears with all the connotations of high and low culture.

Anna Jermolaewa leaves her native Leningrad (now St Petersburg) because of political persecution when she is 19 years old. She arrives in Vienna without either money or friends; she works odd jobs; she studies art history and new media. While still a student she is invited by Harald Szeemann to take part in the section “Aperto Оver Аll” of the 48th La Biennale di Venezia in 1999.

Anna Jermolaewa was born in 1970 in Leningrad (St Petersburg). She works and lives in Vienna and Karlsruhe. In 1992 she graduates Art History in the Vienna University and in 2002 the New Media class of Peter Kogler at the Vienna Art Academy. Since 2005 she is teaching at the University of Art and Design (Media Art Faculty). She has taken part in numerous international shows among which are “Movie Painting”, National Center for Contemporary Art, Moscow (2009); The 4th International Video Art Biennial, Museum of Contemporary Art, Herzliya, Israel (2008); “To discover and to own”, MUMOK, Vienna (2005); “Fractures of Life”, KIASMA Museum, Helsinki (2005); as well as shows in the Sprengel Museum, Hanover, Germany (2003), the “NON-PLACES”, Kunstverein, Frankfurt (2002), and in the Stedelijk Museum, Amsterdam (2001). Some selected solo shows are: “Kremlin”, EDS Gallery, Mexico City (2010); in Kunstverein Friedrichshafen, Germany (2009); “Because it’s like that now, it won’t stay that way” in the Arsenal Gallery, Bialystok, Poland (2009); “Playing along with Anna”, XL Gallery, Moscow (2008); in the Museum for Modern Art, Passau, Germany (2004); in Magazine 4, Bregenz, Austria (2002); in the Ursula-Blickle Foundation (2002); and in the Institute for Visual Arts, Milwaukee, USA (2000)
For more information: http://www.jermolaewa.com

With the support of BMUK, Austria and the kind assistance of Engholm Engelhorn Galerie, Vienna.