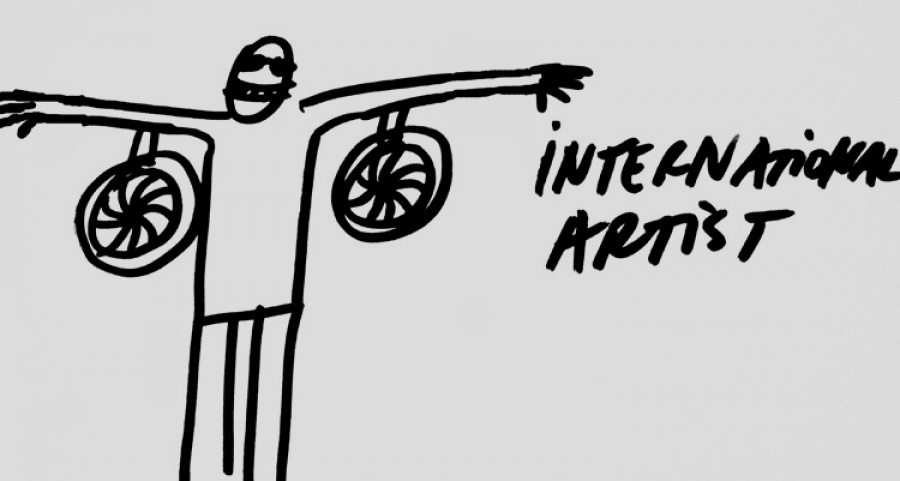 Talks, sights, rumors, newspaper articles, gossip, television, jokes, major and insig­nificant stories, global news, local events – everything could become a source for ideas for the Romanian artist Dan Perjovschi. He covers entirely the walls of galleries and exhibition spaces all over the world with hundreds of amusing drawings. „I want to be quick, mobile, and direct. When traveling with nothing, I could improvise on the spot. I make ephemeral works with permanent markers”, says the artist. He also says that art should not be “...necessarily politically engaged, but engaged. Artists are sensible humanists. Our statements should be heard outside the art world.”

Dan Perjovschi is one of the most famous Eastern European artists now. His ironical art is a critique on the way the global political language of media and analysts are reading the events in our world. His targets are capitalism as well as post-socialism, the absurd of current politics as well as the paradox of being an artist in today’s globalized world. The drawings of Dan Perjovschi, rich in imagination, invention and impact are a witness to the times we are living in.

In 1993 he had the word “Romania” tattooed on his shoulder during a performance festival in the city of Timisoara where the anti-communist uprising in the country had started back in 1989. A decade later in 2003 and for the exhibition “In the Gorges of the Balkans” organized at the Kunsthalle Fridericianum in Kassel, he had the tattoo removed provoked by the changes in the geopolitical situation. The artist says: „I sometimes joke that erasing the word Romania from my shoulder marks the moment when I became an international artist”.

- - - - -
Dan Perjovschi (b. 1961 in Sibiu, Romania) graduated the painting department of the George Enescu University for the Arts in Iasi, Romania. In the second half of the 1980ies he is creating actions, performances and drawings; since the beginning of the 1990ies he works with the “22” newspaper, the first independent weekly in the country. He has participated in numerous exhibitions such as Manifesta 2 (1998, Luxembourg), the 9th Istanbul Biennial (2005), the 52nd La Bienale di Venezia (2007, Venice), the 16th Sydney Biennial (2008), etc. He has had one-artist exhibitions in the Ludwig Museum in Cologne (2005), the Tate Modern in London (2006), the Kunsthalle Basel (2007), the MoMA in New York (2007), etc. In 2004 he was awarded the George Maciunas Prize. Lives and works in Bucharest. www.perjovschi.ro

Short Presentation of the exhibition