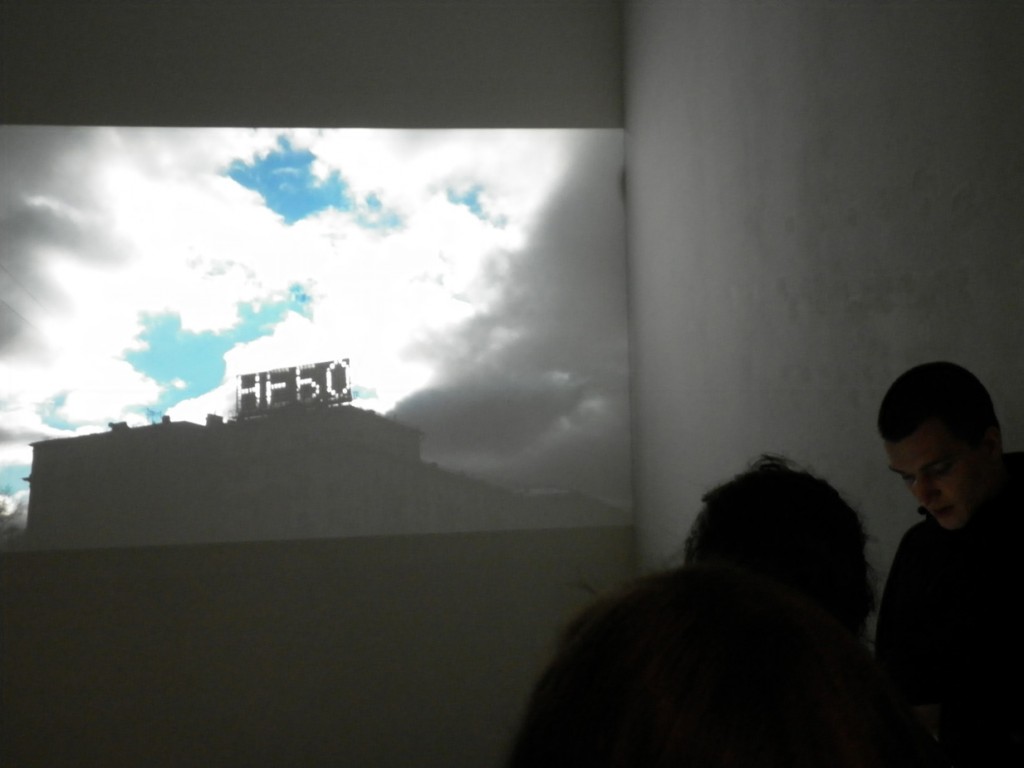 We would like to invite you to a unique meeting with two young and very urgent artists from Russia – Svetlana Spirina, an author of performances, and the political street-artist Tima Radya (www.t-radya.com). They are both philosophers in their initial education; they are both from the city of Yekaterinburg.

When I first met Tima Radya during the preparation of the 2nd Industrial Ural Biennial in Yekaterinburg (2012), he was already famous with his gigantic billboard placed on the roof of a tall building in his home town. The rather “impolite” phrasing of the text proclaimed: “You are screwed” and that was a reaction to the manipulated parliamentary elections in Russia in 2011. He also had another huge billboard after the presidential elections in 2012 saying: “Nothing new”. His works are based on text and are critical reflections on the societal problems of his country. Another type of phrases that he is using – poetic and romantic appeals, quotes from famous poets, etc. are urging dialogue and mutual understanding while insisting that there is still space for love left in the world. In the artist’s view, his works are trying to awaken humanity, and to give a voice to the city as a mosaic of individuals, he is aiming to humanize the post-socialist urban environment.

For the realization of most of his works in public space the artist has never asked for permission or approval. According to his website – he has 30 illegal projects and 9 that have been commissioned. The texts are usually mounted during the night at visible locations while on all available photographs faces of artist and collaborators are hidden. Tima Radya’s projects have been realized in many cities and various countries. Quite untypically for a street-artist he has been awarded the Grand Prix of Cutlog NY, as well as the New Generation prize in Russia.

At the moment Svetlana Spirina (http://cargocollective.com/svetlanaspirina ) is doing her MA at UMPRUM – the Academy for Arts, Architecture and Design in Prague. In some of her performances she is relying on the endurance of her body and psyche; in others – she is analyzing the loneliness in the social and public context, as well as the interactions with the natural while always avoiding the spectacular options. The artist is using the notion of “new materialism” in order to describe her works. This notion is related to the more popular in Europe term of “speculative realism”; she is also engaging with the ideas of some new philosophers linked to the so called trend of “object oriented ontology”. Although Svetlana Spirina is often doing her performances alone in solitude, she is challenging the notions of anthropocentrism and striving to construct relations of semantic equality with the surrounding environment, both natural and man-made.

The meeting will be held in English.

ICA-Sofia is grateful to Martin Penev for the opportunity to organize this meeting in the space and during the preparation for his solo show at the ICA-Sofia Gallery which is opening the next day, Friday, February 23rd, 2018!