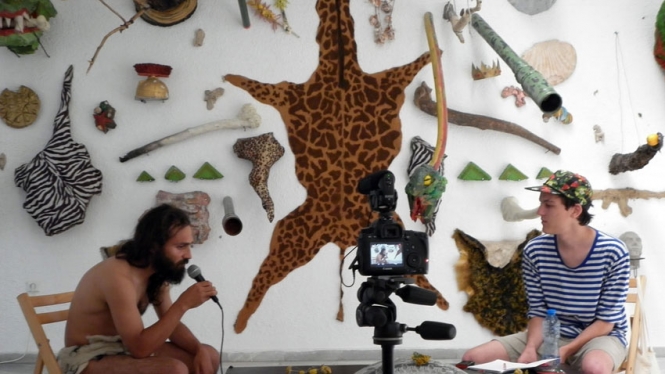 The BAZA award winner for 2016 is Dimitar Shopov

Exhibition of the BAZA Award for contemporary art nominees:

The exhibition of the nominees, as every year, is the final stage of the completion for awarding the most sustainable and popular award for young visual artists in Bulgaria. Its aim is to present the work of those, who are chosen to compete for residency at Residency Unlimited, New York.
According to the already well-known competition rules, the first stage is application with portfolios, and the nominees are presented in a joint exhibition. A winner is chosen on the day of its opening. The residency in New York, which is financed by Trust for Mutual Understanding, has duration of two months.
In the ninth release of the BAZA Award among the five authors nominated Stanimir Genov, Boryana Petkova, and Dimitar Shopov are nominated for the first time. Kalina Terzieva participates for the second time, and for Albena Baeva this is the third nomination.
At the exhibition will be presented their new works – painting, drawings, installations, objects, and performance.
On the day of the opening the audience will have the opportunity to see a performance, which is part of a project by Dimitar Shopov. It will be carried out on June 21 at 2 pm within the exhibition. The opening and the announcing of the winner is at 6 pm.
In 2016 the members of the jury are: Ivana Nencheva, Vessela Nozharova, Diana Popova, Peter Tzanev, and Boshko Boskovic – an art historian and curator, Program Director of Residency Unlimited, New York.
BAZA award winners so far are: Rada Boukova (2008), Samuil Stoyanov (2009), Anton Terziev (2010), Vikenti Komitski (2011), Leda Ekimova (2012), Kiril Kuzmanov (2013), Zoran Georgiev (2014), and Aleksandra Chaushova (2015).